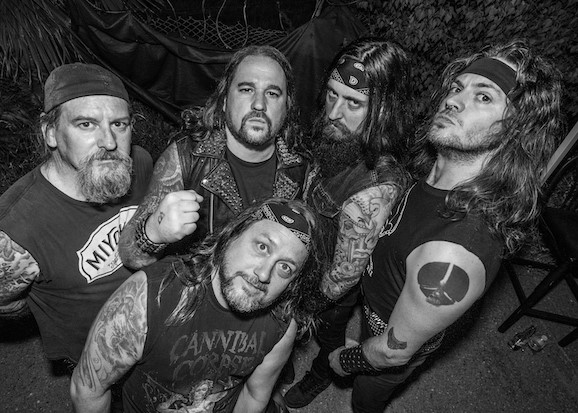 Following up on the release of their critically acclaimed, thrash-masterpiece, Electrified Brain, Richmond’s hard-charging, metal maniacs MUNICIPAL WASTE have released an epic new animated video for their single ‘Grave Dive’ created by Pierre Mousquet, in which the band summons an army of dead fans for a hell-raising concert with cameos by the Toxic Avenger, Lemmy, The Ramones, Skeletor and countless others.

Watch the video for ‘Grave Dive’:

“We are very excited to premiere another video off the new record. We thought it would be a good idea to bring back Pierre and IMOV studios for another animated film since we loved the last one so much. This video has more Easter eggs than the holiday where Jesus died.”

“Almost ten years after “You’re Cut Off,” I had the chance, once again, to dive into Municipal Waste’s awesome universe to create the “Grave Dive” animated video. The song gave me endless inspiration resulting in too many ideas to fit in a 2:32 long video. So don’t blink!”

It’s time! Time to get a taste of that new WASTE! After months of anticipation, Richmond’s hard-charging, thrash metal maniacs MUNICIPAL WASTE have released their 7th studio album, Electrified Brain, via Nuclear Blast.

Since 2001, MUNICIPAL WASTE have uncompromisingly stuck to their guns as hard-partying and even harder-hitting torchbearers of 21st century thrash metal. The Richmond, VA quintet—Tony Foresta [vocals], Ryan Waste [guitar], Philip “Landphil” Hall [bass], Dave Witte [drums], and Nick Poulos[guitar]—have transformed from a cult favorite into metal mainstays for a generation. Along the way, Decibel touted The Art of Partying in its coveted “Hall of Fame” and asserted it “revved up interest in thrash and inspired a fresh wave of youthful new bands.” Metal Hammer christened The Art of Partying one of “The 50 Greatest Thrash Metal Albums Ever,” while Loudwire pegged The Art of Partying as “The Best Thrash Album of 2007” and Hazardous Mutation as “The Best Thrash Album of 2005.” The guys have sold out countless shows on multiple continents and piled up tens of millions of streams in the process. 2017’s Slime and Punishment bowed in the Top 3 of the Billboard Heatseekers Albums Chart, and The Last Rager EP only accelerated their momentum in 2019.

MUNICIPAL WASTE maintain course as vicious and vital as ever on 2022’s Electrified Brain [Nuclear Blast] as heard on tracks like ‘Grave Dive,’ ‘High Speed Steel‘ and ‘Crank The Heat‘. Recorded during the pandemic in Philadelphia with producer Arthur Rizk [Power Trip, Code Orange], the sessions would be the first time the band reunited in person after a year. Together, they achieved “a thicker and heavier sound.”

In the end, Electrified Brain will give you everything you’d want from a MUNICIPAL WASTE record or heavy metal record, period. “We hope you walk away with some bloody ears, blown speakers, pissed off parents, black eyes, and a healthy distrust of authority,” says Tony.