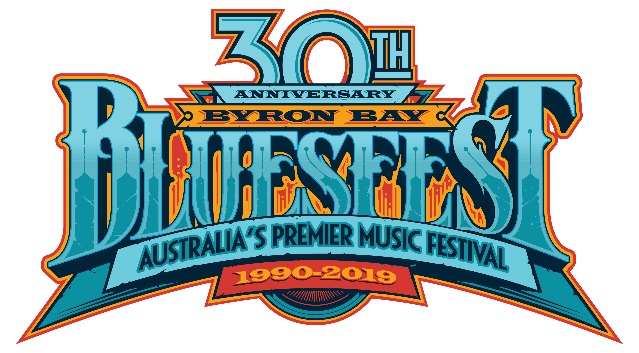 Australia’s five-day music festival dedicated to showcasing some of the best live acts in the world, held in Byron Bay each Easter, today announced 14 new artists added to the line-up for the festivals 30th Anniversary Celebration from 18-22 April 2019.

With even more artists yet to be announced…

With just 148 days to go until Easter 2019, Festival Director, Peter Noble OAM comments on the announce saying: “With our third artist announcement for Easter 2019, featuring 14 great artists, it brings us to almost 60 artists announced to date – with plenty more to come! You can now start to see the great headliners and depth of talent that are joining us to celebrate our 30th Anniversary, including the incredible Iggy Pop and nine-time Grammy winner Norah Jones!

Tomorrow night, Bluesfest will be officially acknowledged as a Hall of Fame recipient at the 2018 NSW Tourism Awards, after having won The Best Major Festival and Event award for three consecutive years. This year Bluesfest was also nominated for the sixth year in a row for Best International Music Festival at the Pollstar Awards in Los Angeles.

It truly is a great music experience we offer, and we are going all out to make our 30th birthday our best celebration yet. Come join us this Easter!”

Tickets are selling faster than any other Bluesfest in history, we are heading for a spectacular celebration and sell-out 30th Anniversary next Easter.

Often considered the godfather of punk – Iggy Pop is making a welcome return to Bluesfest this Easter! Widely acknowledged as one of the most dynamic stage performers of all time, Iggy Pop pre-figured both ‘70s punk and ‘90s grunge and has built a legendary career filled with both critical acclaim and fanatic cult success. After tearing the roof off the Bluesfest marquee in 2013, we are more than excited to have this iconic star back for our 30th Anniversary. Seeing Iggy Pop rock out is definitely a performance to put on every music lovers bucket list.

Nine-time Grammy Award winner Norah Jones is making her Bluesfest debut at our 30th Anniversary Celebration this Easter Long Weekend. Norah Jones first emerged on the world stage with the February 2002 release of “Come Away With Me”, her self-described ‘moody little record’ that introduced a singular new voice and grew into a global phenomenon, sweeping the 2003 Grammy Awards and signalling a paradigm shift away from the prevailing pop music of the time. Since then, Norah has sold 50 million albums worldwide and won a string of accolades. Her incredible versatility in music is portrayed across her many albums and collaborations with artists of varying genres including Willie Nelson, OutKast, Ray Charles and Foo Fighters. Norah recently released “Wintertime”, the fourth in the series of eclectic singles that she has been releasing over recent months and the second offering from her collaboration with Wilco’s Jeff Tweedy. As one of the music world’s most consistently intriguing singer-songwriters, Norah has returned to her Jazz roots in her latest album while also proving to be the purveyor of an unmistakably unique sound that weaves together the threads of several bedrock styles of American music: Country, Folk, Rock, Soul, Jazz. We are super excited to see Norah perform in Byron Bay this April.

We’re thrilled to say, travelling merchants of R&B blues Nathaniel Rateliff & The Night Sweats are joining the jam-packed Bluesfest 2019 line-up. The seven-piece Soul band will be gracing the stages of Bluesfest again but this time with a new album under their belt and an even larger Australian audience after a reinvention of his style in 2015 which is meant to be heard live. Known as a party animal on stage, Nathaniel Rateliff & The Night Sweats offer a unique live performance with a front man who possesses a husky sixties styled voice with inflections of Gospel and a vibrant soulful band to support it.

The incredibly talented Imelda May is making the journey from the Emerald Isle to Byron Bay for our 30th Anniversary Celebration this Easter and we are already stoked for her powerful live performance. In her most recent album, ‘Life Love Flesh Blood’ produced by the legendary T Bone Burnett, Imelda has found a new groove, exploring Blues, Soul, Gospel, Folk, Rock, Acoustic and explosive Balladry, traditional to her heritage in the boldest, most personal and intimately autobiographical songs that she has ever written. Get ready to meet the new Imelda May this Easter and prepare to be truly amazed.

After several extremely memorable sets at Bluesfest over the years, you can be assured Melbourne Ska Orchestra will follow through with an unforgettable stage performance for our 30th Anniversary Celebration this April! Renowned for their live shows, the 30 odd piece orchestra featuring an 18-piece horn section, a mean rhythm section, percussionist, organist and four singers is sure to enthral Bluesfest audiences this Easter long weekend. Fronted by Nicky Bomba with his professional, energetic and impulsive conducting, Melbourne Ska Orchestra is a fun-loving big band experience which we cannot wait to see perform at Bluesfest.

Making a very welcome return to Bluesfest 2019 is Australian singer-songwriter and guitarist, Archie Roach. Archie’s career has spanned three decades and his work has been recognized locally and internally in both mainstream and indigenous circles. Over the many years of his successful career he has shared the stage with some of the world’s most iconic artists including the late Leonard Cohen, Rodriguez, Bob Dylan, Tracy Chapman and Patti Smith. His music speaks the stories of his people, of this land and of the human condition. With Archie’s universal and unique voice, we cannot wait for him to return to Bluesfest for our 30th Anniversary Celebration.

Melbourne Folk-Pop duo, Pierce Brothers are returning to Bluesfest for our 30th Anniversary Celebration. Comprising of twin brothers Jack and Pat Pierce, the multi-instrumentalists have been shaking dance floors and selling out rooms across the UK, Europe, Canada, USA and of course, their native Australia. Their irresistible energy and world-class live show has generated a buzz like no other which is sure to garner a big crowd in Byron Bay this Easter.

Aussie Blues band, Backsliders are making a welcome return to Bluesfest 2019. After touring the festival circuit and recording for over 30 years, Backsliders sure know how to entertain the crowds! Led by slide guitarist, multi-stringed instrumentalist, songwriter and vocalist – Dom Turner, the group’s influencers are varied; blending Mississippi country Blues, Rock, Dub and Sounds of Asia into their unique music which has won them multiple accolades including an ARIA Blues and Roots nomination and iTunes Australian Blues and Roots album of the year. With Rob Hirst, one of the founding members of Midnight Oil on percussion and drums, these guys are renowned for their captivating live shows with an eclectic mix of Blues musical styles. Make sure you catch these Aussie legends over the Easter long weekend.

We’re super excited to welcome Grammy Award winner, Fantastic Negrito to Bluesfest for our 30th Anniversary Celebration. Fantastic Negrito represents Xavier Dphrepaulezz’s third rebirth, literally coming back from death this time. The narrative on this man is as important as the sound, because the narrative is the sound. His songs are born from a long hard life channelled through black roots music. Fantastic Negrito is the story of a man who struggled to make it and with an incredible, self-taught musical talent, he managed to find his way back on track to stardom. When you listen to Negrito, you’re invited to hear the story of life after destruction. Fantastic Negrito is a poignant and exciting artist creating high-quality Blues music we are excited to see live this Easter.

South Carolina Blues Rockers, The Marcus King Band are making their Byron Bay Bluesfest debut this Easter, promising a blistering but Soulful live performance at Bluesfest 2019. Lead by the 20-year-old phenom Marcus King, the band have exploded over the last year bringing their southern fried brand of Blues and Psychedelia inspired Rock n’ Roll on a global tour. The band operate as more of an improvisational juggernaut versus a one-man axe-wielding show backed by a few musicians. After being labelled a highlight of multiple European festivals earlier this year for delivering their own mix of Rock n’ Soul, we are really looking forward to seeing these guys rock the stage at our 30th Anniversary Celebration.

We are thrilled to welcome Zimbabwean born and Melbourne based singer-songwriter, Thando to Byron Bay for her Bluesfest debut this Easter! The multi-dimensional performer has been extremely busy gracing stages around Australia with her electric presence and powerhouse vocals including a support slot for the sold-out Allen Stone show last October. Forging forward to solidify her status as Australia’s newest first lady of R&B, be sure to catch her powerful performance.

No strangers to the road, Australian Alt Country-Rock duo Little Georgia have spent the last three years touring relentlessly and sharing their music across the globe. Known for their powerful live performances, Little Georgia deliver beautiful harmonies and compelling lyrics amongst a sea of Acoustic Folk, Country songs and crazed out Electric jams. The duo’s debut studio album ‘All The While’ was released earlier this month.

Yorta Yorta singer-songwriter, Benny Walker is the real deal. His love songs and epic tales are mixed with passion for people, the land, summer vibes and deep grooves that reach the soul. Capturing hearts with darker tracks reflecting a shadowy side, Benny’s killer voice and songwriting talents have impressed audiences far & wide. We’re delighted to have him added to the bill for our 30th Anniversary Celebration.

We’re stoked to welcome 24-year-old Dallas Woods to Byron Bay for his Bluesfest debut. The young Noongar man, raised in the East Kimberley’s lures you in with his cheeky vibe, inspiring the audience with a positive skew just as you’re smiling along, he’ll pack you with a punch to the guts rapping about confronting subjects in a manner so lightly you feel confused! Having recently MC’d on Baker Boy’s recent sold-out Marryuna Tour across the country, Dallas is no stranger to the stage and is sure to get crowds going at our 30th Anniversary Celebration.

All joining our previously announced artists for 2019:

Nahko and Medicine for the People

Lukas Nelson and the Promise of the Real

Samantha Fish – The War and Treaty

I’m With Her – Larkin Poe – The Black Sorrows

**Please note, GreenSky Bluegrass have cancelled their performance due to unexpected circumstances. They sincerely apologize for any inconvenience and look forward to finding their way to Byron Bay Bluesfest as soon as they possibly can. Thanks in advance for your understanding.