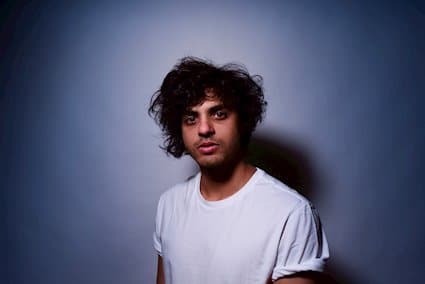 Harts is the nom de plume of Indian-born, Australian-based musician, singer/songwriter, multi-instrumentalist, composer, and music producer Darren Hart, whose singular blend of funk, jazz, blues, psychedelic rock, and indie electronic has drawn comparisons to Prince, Jimi Hendrix, and Lenny Kravitz, among others. Queens Kings And All Big Things, the latest album from Harts is due to be released on the 9th of November.

Queens Kings And All Big Things is a contextual continuation to Harts last album Smoke Fire Hope Desire. The theme of the album continues on from the song Desire, the last song on the LP version of SFHD.

“Throughout the process of writing this album, I was back and forth between Australia and the U.S. I went though a lot of changes in that two year period, both in my personal life and my music life. A lot of self re-discovery, dealing with lack of self confidence, and finding my place within this world. I think a lot of that is reflected into this album, and unashamedly brought up throughout the songs. In that way, as wacky as the ride may me, there’s a lot of personal struggle within this body of work.
Overall it has a different musical and production style to the previous album, utilising a lot more intricate hypnotic rhythms, beautiful chords, melodies, orchestras, dynamic vocals and arrangements. I feel it’s a progression for me as a songwriter, composer, musician and solo Artist and I’m very proud of it” – Harts

Harts went independent for his 2014 long-player, Daydreamer, a ten-track collection of guitar-heavy electro-funk jams that drew praise from Prince Rogers Nelson himself, who noted that Hart’s full-length debut reminded him “of how I was at that age”. It was later revealed that Hartshad traveled to Prince’s Paisley Park compound earlier in the year for a meet-and-greet/jam session.

2015 saw Harts release his second EP titled Breakthrough, which featured two Triple J #1 played songs When a Man’s A Fool and the title track Breakthrough. Harts was approached by Subaru for an experimental creative campaign in which the 2016 WRX model car was fitted with the guitarists Wah-Wah pedal as the accelerator. The campaign reached hundreds of thousands of people and helped cement Harts as Australia’s new guitar hero. 2015 also saw Harts play shows in both Hong Kong and Thailand.

Harts joined the ranks at Universal for his sophomore LP, 2016’s Smoke Fire Hope Desire, which was issued in the United States the following year via Razor & Tie. The album earned much praise and accolades including being awarded Breakthrough Artist of the Year at the GQ Australia Men Of The Year Awards, being invited to collaborate on a song with The Roots & Lenny Kravitz for the official 2016 Olympic Games Campaign and gaining major radio airplay including landing Triple J’s Album of the Week. 2016 saw Harts visit Europe and play shows in Amsterdam, Paris, London and Berlin as well as a festival slot at Pink Pop in the Netherlands.

Departing Australia to pursue career opportunities in the U.S for the majority of 2017, Harts reached a wider audience via American television when his song Power featured in the DC Comics NBC sitcom Powerless, and also landed a video premiere for the single Peculiar on Conan O’Brien’s digital channel Team Coco. Harts toured the U.S including shows in San Francisco, New York, and LA. He also performed at Chicago’s Wicker Park Festival and LouFest Music Festival in St Louis.

2018 has already seen Harts land huge features such as playing guitar with Joey Bada$$ for Triple J’s
Like A Version and rocking 80,000 people at the MCG with Peking Duk for the NRL State of Origin pre-game entertainment. He also wrapped up two huge sets at Bluesfest and premiered a brand new expanded live band for a special sold-out show at Howler in Melbourne in July. Harts has recently released singles Ain’t Nothin’ On Me,21&19 and Wishfulness all of which feature on Queens Kings And All Big Things.

To coincide with this release Harts is touring Australia, as he takes his expanded live setup, Australia wide for the first time. His new shows will be a great opportunity to see him perform his new music, with a bigger, expanded live band. Its going to be an all new, intimate and experimental show.