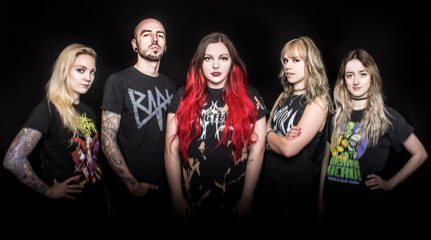 Spread the love
The female dominated Dutch Death Metal squad SISTERS OF SUFFOCATION releases its second video from the upcoming album Humans Are Broken for their new single “Little Shits”. It’s as raw and energetic statement against all sexists and haters that didn’t take the band serious because of their gender.
Watch the new video now

The band on the new video:
“This song is about doing what you love and following your dreams, regardless of what other people may think of it. It is about diversity and equality, as well as having a passion for music and living for it to the fullest. It is about being yourself and trying to deal with people putting you down due to ignorant views and blatant prejudice. Finally, it is about overcoming negativity and putting your foot down, cause noone has to take shit from another person simply because they live their lives and love it. We hope you all enjoy it; we certainly do! Also: big shout out to Marc van Peski for the live pics in the video.”
Eindhoven based SISTERS OF SUFFOCATION are here to bring us the best of both worlds: the raw and primal force of old school death metal clashes with the sophisticated technicality and epic-melodic infusions of modern times.
Pre order Humans Are Broken
http://smarturl.it/humansarebroken
Tracklist:
1. Humans Are Broken
2. Wolves
3. War In My Head
4. The Machine
5. What We Create
6. Liar
7. Little Shits
8. The Next Big Thing
9. Blood On Blood
10. The Objective
11. Burn
12. Every Little Fiber
13. For I Have Sinned