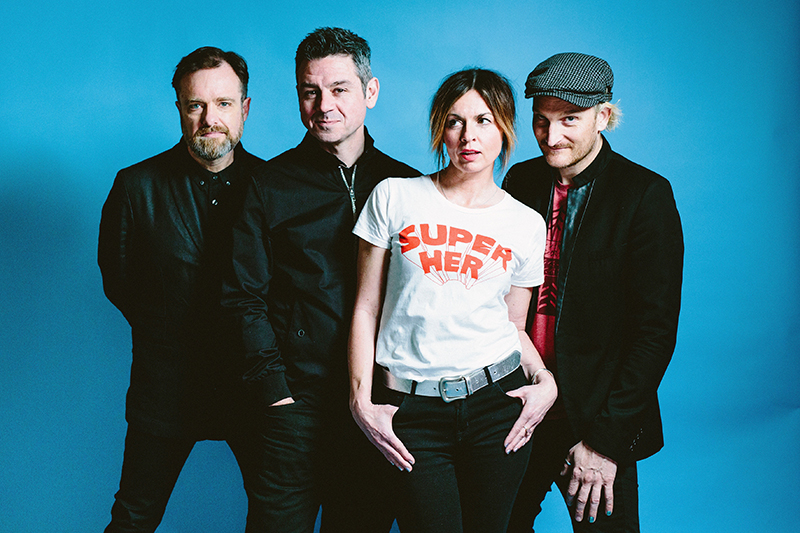 ‘THE MODERN AGE’ OUT 22ND MARCH

In March 2019, Sleeper release their first album in 21 years, The Modern Age. It wasn’t meant to happen. In fact, the band had promised each other it never would. ‘I sold my drum kit two months before we reformed,’ Andy Maclure says, ruefully. ‘It was taking up too much space in the attic. A few weeks later, Lou comes off the phone and says, ‘we’re playing to two thousand people next month, you better go and buy back those drums.”

Sleeper enjoyed huge critical and commercial success in the mid 90s: achieving 8 Top 40 singles across 3 Top 10 albums with well over 1,000,000 sales. They garnered front covers across the music press and appeared numerous times on key music shows of the era; including Top Of The Pops; an episode of which Louise Wener presented.

Together, they toured to sell-out crowds in the UK, US and Japan and played the main stages of Reading and Glastonbury. They toured with Blur, supported REM at Milton Keynes Bowl and toured the US with Elvis Costello, who later recorded a version of their top ten hit, What Do I Do Now? Their music was characterized by astute, observational lyrics and big, hook driven melodies. Wener was an iconic front-person, heading up a movement that brought women center stage in guitar music.

Sleeper split In 1998 and walked purposely away from the limelight. Wener carved out a career as a successful novelist, publishing her auto-biography, Different for Girls in 2010. Maclure and John Stewart – Sleeper’s guitarist – both became lecturers in music studies with Stewart recently completing his PhD.

In February, 2017 Sleeper were invited to headline the Starshaped Music festival: four gigs in four cities, a celebration of all things 90s and Britpop. ‘We’d get these offers every so often,’ Wener says, ‘and I’d always ignore them. This time I didn’t. It was a timing thing. I’d just turned 50, and someone very close to me had just become very sick. I had a powerful sense of time passing. A sudden impulse to step out of my comfort zone. Four gigs and that would be that. I just wanted to know if I could do it. “

With Kieron Pepper, previously of The Prodigy, joining on bass, Sleeper decided to play a few more dates. They followed their triumphant festival return with a sold out headline gig at Shepherd’s Bush Empire and a sold-out UK tour followed. ‘The reaction was so joyful,’ Wener says of these dates. ‘There was a strong sense of camaraderie in the crowd, it felt like we were all sharing a moment. Everyone in the band wanted to carry on playing but we weren’t sure it made sense without recording new material.’

The band spent summer 2018 recording The Modern Age with their long time producer, Stephen Street – a relationship that clicked into place again right away. They tracked live at Metway studios in their adopted city of Brighton, before decamping to Street’s studio in West London to add the finishing touches.

Initially the plan was to re-work a tranche of material from the early post-Sleeper period when the band found themselves holed up in George Michael’s North London Studio, recording demos for an unreleased album. But Wener soon decided the material needed to be brand new.

‘I wanted this album to reflect a moment in time,’ Wener says, “the songs and lyrics needed to reflect who I am now and the world we find ourselves in. First single, Look at You Now is a protest song. Initially it seems like it’s referencing our comeback, but it’s a howl for the politically homeless, in a landscape where reasoned debate has given way to vitriol. Musically we looked to fuse childhood 80s sonics with the quiet menace of a John Carpenter soundtrack.” In The Sun Also Rises, Wener offers hope and positivity after personal loss, the music combining elements of 5th Dimension and The Happy Mondays, to give the record its most uplifting moment.