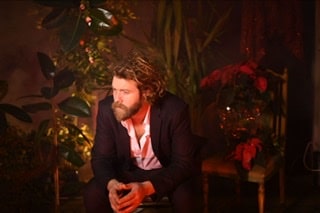 Our homegrown son of modern folk, Steve Smyth, returns to Australian stages this summer, touring from Darwin, down the East Coast to Victoria and on to Adelaide, with his unmistakable, resolute vocal melodies and a new body of work, full of mystique and beauty, set to be unveiled.

Since relocating to Europe 2016, where Smyth has spent his time writing, touring, and mastering his craft along with the construction of a studio and renovation of his house. In returning to his native land, he brings all these evolutions and revolutions in song.

Steve is also excited to announce a new track “Stages” – which will be released worldwide on Friday 21/2/20.

About the new track, Steve notes: Stages is about the different challenges that we all face in our life, the contemplation of those, how they connect us and simultaneously isolate us’.

“Stages was written and recorded in a cathedral in Barcelona, I stumbled in to ask and was surprised to hear the priest’s acceptance of my idea. I gathered friends of mine, along with a lot of studio gear and we recorded it in live takes. I was searching for a sound for these songs that I realised were in these echo chambers of penitence. In a completely atheist and functional overview we did let these stories rumble through these walls that have heard so many before, I felt comfortable in the humanity of consonance.”

“STAGES”
TO BE RELEASED FEBRUARY 21

Written & produced
Steve Smyth.
Engineered
Ale Ortez & Steve Smyth.
Mastered
Wade Keighran.
Blending a variety of influences into his earthy, soulful sound; from the bar room grit of Tom Waits to the wistful melancholia of Jeff Buckley, Smyth grew up travelling the country and was constantly surrounded by music.

Steve took to guitar early, and was playing solo and in bands by his teenage years, taking in a mix of folk (Lead Belly, Dave Van Ronk) and rock (Radiohead, Nirvana) influences. He issued his debut album “Release” in 2011, after which he travelled Europe, acting on his wanderlust, touring, working and writing songs for his follow up “exits”. And an exit is what eventuated true to the term, until now.

Our new body of work from this acclaimed underground artist brings forth “Blood” that holds a pact to his honest deliverance live and in script.

Entering through the door of the cathedral where it was recorded in live takes in his local neighbourhood in Barcelona, an age-old story is sung that all have felt in its tune.
STEVE SMYTH’S 2020 AUSTRALIAN RETURN