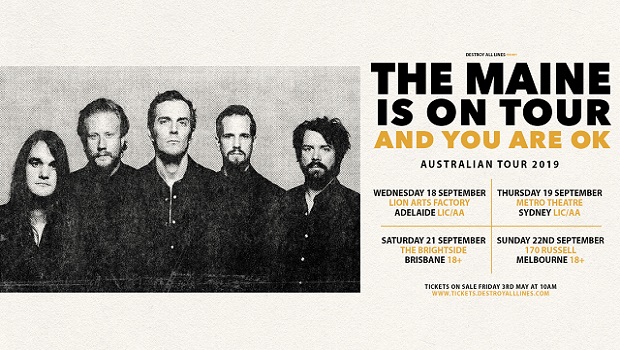 After twelve years and seven studio albums, Arizona’s THE MAINE continue to push onwards and upwards as their new album You Are Okay hit #1 on the Billboard Independent Album Charts; and now the band are taking the show on the road, proudly announcing they’ll be joining their Australian fans this September for their biggest headlining shows yet. “This is us, for the first time, fully realising a vision we had from conception to finished product. All hype aside, this is us making music, putting everything into it, and holding our heads up higher than we ever have before.” Words of lead singer John O’Callaghan ringing honest and true.
THE MAINE have never been a band to rest on their laurels with their live performance, and they have promised that this run of Australian shows will not be ones to miss. Don’t sleep on getting your tickets!