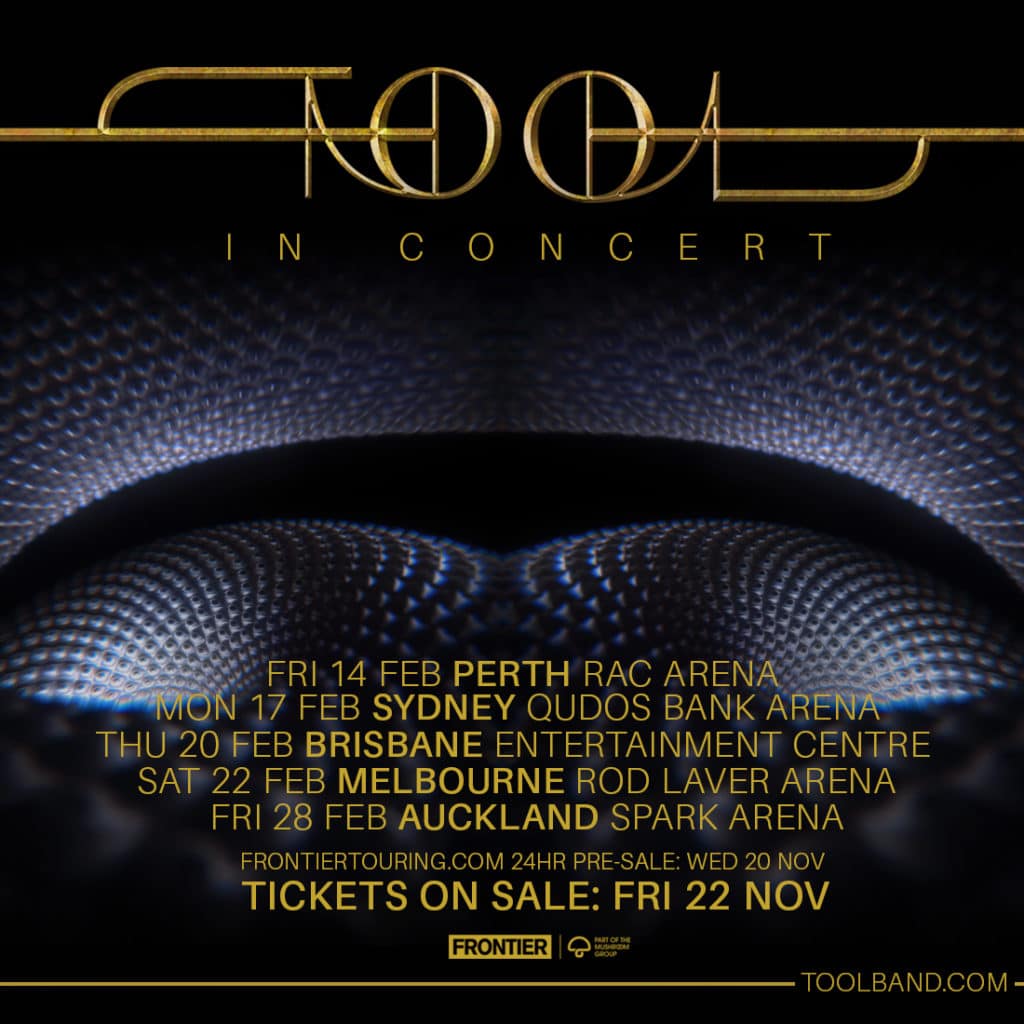 TOOL
RETURNING TO AUSTRALIA & NEW ZEALAND FOR THE FIRST TIME IN SIX YEARS – FEBRUARY 2020
ON SALE FRIDAY 22 NOVEMBER!
SPECIAL GUEST TO BE ANNOUNCED

The most anticipated rock tour of 2020 is here: Frontier Touring are thrilled to announce the return of triple Grammy® award-winning Californian rockers Tool, performing in arenas across Australia and New Zealand in February 2020 – their first shows in both countries in six years. The tour comes off the back of the band’s critically-acclaimed fifth studio album, and their first new record in 13 years, the incredible #1 ARIA Album Fear Inoculum.

‘Maynard is a joy to watch. The light, laser and video show is something else … At times spectacular, the visuals are the perfect accompaniment… Could other bands be this adventurous in 2019 and succeed to this extent?’ – LA Weekly

‘The visuals were provocative, with laser lights and an LED screen featuring a variety of videos – fetuses, aliens, skeletons, emaciated figures, insects, water, and fire – in line with the band’s romanticising of doom and destruction’ – Entertainment Voice’

Currently on a mammoth 26-date tour in the USA, Danny Carey (drums), Justin Chancellor (bass), Adam Jones (guitar) and Maynard James Keenan’s (vocals) groundbreaking, epic live show sees a band at the top of their powers. Their immersive live visual experience is as brilliant as the band’s music itself, and not to be missed. General public tickets will go on sale on Friday 22 November via frontiertouring.com/tool.

Released in August 2019, Fear Inoculum debuted at #1 in Australia and New Zealand (the band’s third consecutive #1 album in both countries) – with #1 debut position also in Canada, Norway, and Belgium. In the USA, the band knocked Taylor Swift off the top spot and sold 270,000 units in its first week alone. Critics were united in praise, Rolling Stone describing Fear Inoculum as: “A formal masterpiece that should stand the test of time.”

‘The draw of the performance … was the chance to hear the group’s intricate, multi-movement songs at a pulverising volume that still had shape and detail thanks to an impeccable live mix’ – Los Angeles Times

‘They’re so solid as a unit and at times it’s like watching a magician perform a magic trick. How do they do it?’ – Daily News

VIDEO: ‘Schism’ by Tool
Adding to these special shows, fans will have the opportunity to purchase a limited edition VIP Package, details of which can be found here.

Sign up to become a Frontier Member to gain access to the Tool pre-sale, which begins at 2pm (local time) on Wednesday 20 November. Tickets to the general public will then go on sale on Friday 22 November at 2pm (local time). Head to frontiertouring.com/tool for all the details.

Don’t miss the multi-sensory, groundbreaking experience that is Tool, live in concert. Do not delay – tickets will not last long!