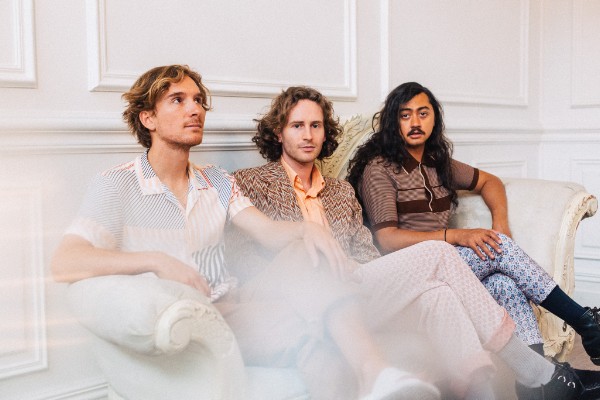 OUT NOW VIA FUTURE CLASSIC

With the new single, comes a film-shot visual – directed by Jordan Kirk (XingerXanger) – in a sprawling retro-fitted mansion of burnt-oranges, velvet furnishings and a spooky storyline not to be missed. Set to a galloping rhythm and warm arpeggiating synths, Campion’s velvety vocals repeat “I’m not giving you any more of my time” as the ethereal production comes to a fold.

Following summer’s “Gun” and autumnal bliss via “Callisto”, World Champion and gear up for the release of their much anticipated Skyline EP, to be released on May 10.

Hitting the road this month, the band visit Adelaide’s RCC Fringe on Saturday March 16, Sydney’s Golden Age Cinema on Friday March 29, before performing at Bad Friday in Marrickville on Saturday 19 April, and Wollongong’s Strawberry Boogie on Thursday May 16.

The sophomore effort follows their critically acclaimed with their debut EP Avocado Galaxy (2015) and the lively track of the same name, that was dubbed by Noisey as “zingy synth-pop at its finest“. Gaining rotation across Triple J, FBi Radio and BBC 1, the EP set the tone for the band’s electrifying live show, which inspired fans to tattoo themselves with avocado galaxies and saw the band play at some of Australia’s biggest festivals including Splendour in the Grass, Lost Paradise, Mountain Sounds, Groovin’ the Moo and Volumes alongside supporting Toro Y Moi, Chkchkchk!, Jagwar Ma and Parcels.

To celebrate the release, World Champion will embark on a series of special live shows that will showcase their new material for the first time live. Tour dates below.

SKYLINE EP OUT MAY 10