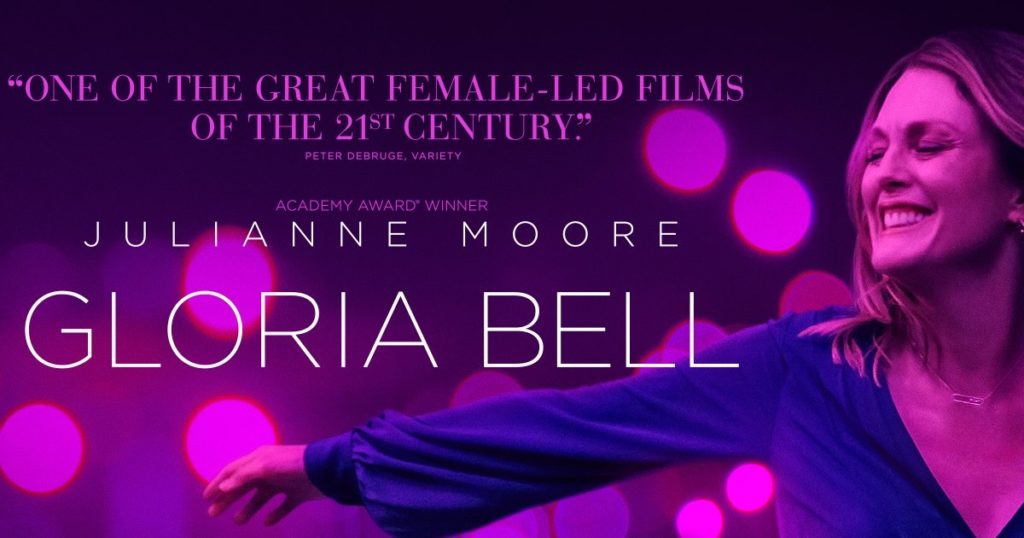 It’s never a good sign when there’s a big gap between the critics’ and audience tomatometer score — and the gap in this case is huge.

Why do audiences hate Gloria Bell? It is not a bad film. It’s beautiful to look at, meticulous in its atmospherics. The acting is very strong and the story is mature and zeitgeisty.

Julianne Moore as Gloria is striking in her detailed performance, and she executive produced it too; so it’s subtle and respectful to the woman’s POV. What’s more this film has real pedigree. It’s an American remake of Oscar-winner, Sebastián Lelio’s award-winning 2013 Chilean film,Gloria.

So why the low score?

Consider who would choose to see an art-house intimate portrait of a woman of a certain age navigating life and love alone in America. Critics may love the washed out day scenes, the moody night scenes and the shadowy, bathed-in-orange love scenes; but moviegoers want to see Gloria win at life! Sure it’s artsy that she talks politics topless and smokes pot and has a drunk montage with Samwise Gangees (Sean Astin) but people pay to see grit and hope.

The film sets up a quiet expectation of fulfillment for Gloria. She at first tentatively, then enthusiastically, takes up with Arnold (John Turturro at his best since Fading Gigolo), the newly-divorced guy she meets at an over-40s club. From their dates you see she’s been through this unsuccessfully many times. She’s friendly but cautious.

The one outstanding feature in Gloria’s muted pale pink and grey style are her large, dark spectacles. They are an odd choice for a woman who prefers elegant soft-sleeved floral and flowy blouses. Neither flattering nor feminine, they’re eventually revealed as a Chekov’s gun when Gloria confronts her ageing eyesight, which spur her decision to rekindle a romance with Arnold.

Recent films about mature women feel more satisfying. Emma Thompson (The Children’s Act) and Glenn Close (The
Wife), like Moore, gave nuanced, intense performances. But while Moore is a masterful actor,Gloria isn’t those films. Nothing truly changes for her at the end, she hasn’t resolved or evolved. There’s no soulmate or dream trip or righteous victory. Gloria’s life at the end of the film is no different. She’ll go to work, hang out with friends, love her kids and dance at the club. She’s now just a little more broken and humiliated by life.

Older female audiences get a raw deal at the movies and sometimes at life. A trip to the cinema can be a break from endless caring and work commitments. I think audiences hate this film because they just want – and deserve – to see a happy.

Gloria Bell
is in cinemas from April 25.

Irena Bee is a movie and TV critic and PhD business student. She works as a communications expert for nonprofits, start-ups and community groups. She runs 44 Playbook and you can find her @PRproAus and at 44Playbook