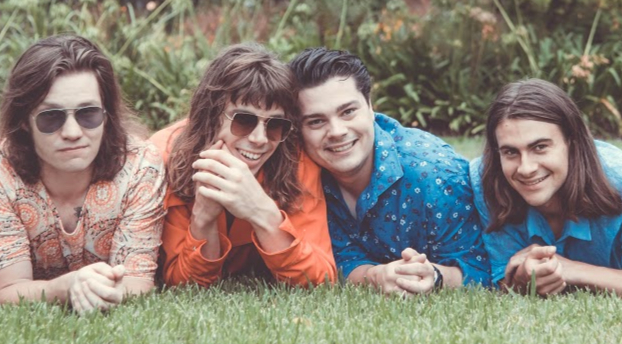 United by a shared love of the attitude, aesthetic, and music of classic rock and roll culture, Brisbane’s Port Royal have been making waves in the local scene since mid-2015. Their mind-melting mix of electric live performances and blend of iconic 70’s rock influences complemented by contemporary and relatable lyrics makes for an unmistakably catchy sound that will have you singing along with every chorus. Heading into 2019, the band will release their latest single Don’t You Forget About Me and plan to embark on their biggest national tour to date. The song is a summer indie pop tune and somewhat signifies diversity from their traditional song writing roots.

Whether it’s being behind time due to an automotive malfunction, a non-existent alarm clock, an inaccurate planning of time to distance ratio or an airline check in time frame, logistics are one of the biggest threats to this band’s punctuality and ability to perform a thorough soundcheck – especially whilst under the influence of pressure. Living this rather abnormal lifestyle can definitely have a large effect on one’s ability to get themselves to soundcheck on time.

As Morto (Liam Morton – Lead Guitarist), adheres to a strict rule of 4 tooth brushings a day and Chase’s (Chase Brodie – Bass Guitarist) extended toilet breaks get the better of imminent deadlines, the humanistic desire for proper hygiene can really put a spanner in the works when trying to meet a 5:30pm soundcheck. The rush out of the door and harrowing call to “Load the car!” can often be easily ignored for the sake of a minty fresh breath or a little more ‘me’ time in the shower.

Living a lifestyle where convenient healthy food is hard to come by, a full stomach is of high importance amongst this group whose eyes are definitely bigger than their stomach. I’d like to believe this band provides itself on healthy and suitable sized eating in order to combat the repercussions of its debaucherous behaviour. One thing is for sure, there’s nothing that gets Arnie (Connor Arnold – Drums) more offside than missing his big 3, breakfast, lunch & dinner – a growing boy needs his energy.

There may be a sound system that requires more attention and delicacy than any of your previous relationships, but the gloomy nature of a final goodbye during your last 24 hours in a city can often affect one’s decision making when confronted with the option to pass on a soundcheck for the sake of some extra alone time with a special someone.

In an industry where a dollar is hard to come by and independent bands are a struggling self-funded entity, you’ve gotta learn to take the money when it’s offered to you. A hard working day on the streets busking your guts out to meet the 6pm home time rush can often take preference over an extra 20 mins spent on guitar levels at a venue where the PA is incapable of audible difference. The cafe and small bar acoustic gig hustle can also hinder the unsuspecting member whose 6pm finish time had soon become 7pm when considering that extra cash could satisfy the week’s rent. Nevertheless, the Port Royal show takes priority at all times, but the soundcheck may often fall second priority if there’s a phone bill due in a couple of days.