My Dream Rider: One More Weekend 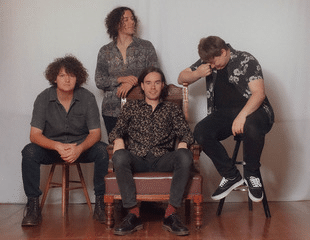 Pulling from influences such as The Maine/Foo Fighters/Powderfinger, they have travelled Australia playing over 150 shows. Their 12 track album is currently available to listen to on all the socials/youtube and you can get a limited CD hardcopy at their Bandcamp store.

Their latest single “Listen” was released in December and they are currently working with producer Adrian Hannan (The Songstore)
on new recordings.

1 Connor- Johnny Knoxville to be present just to hear the famous “hi I’m Johnny Knoxville”
2 Tim- 100 Boxes of nacho cheese shapes but the old ones before they changed the recipe
3 Tim- My own personal chef that only cooks for me so the others don’t get any.
4 Jays- Packet of Coles brand burger rings, first thing that came to mind really.
5 Leith- Every brand of alcohol on demand to create any mixed drink my heart desires.
6 Tim- Dune buggy’s so we can drive them head on into each other and bounce right back.
7 Tim- Dune buggy track…err, for the dune buggy’s obviously.
8 Connor- Fully loaded Paintball guns for pre and post gig played as 2v2 games
9 Tim- A mixing station so Leith can make us drinks.
10 Connor- Invisibility cloak cause like after watching Harry Potter who wouldn’t want one.

With plans to release the new songs later this year (Covid dependant), you can follow our Facebook and insta (onemoreweekendband) to keep up to date with timings. Stay Safe 😀

View all posts by 27 Magazine
Older Single Review: Zak Fleisher Get Away/ Turntable Newer News: Alexis Naylor releasing new album ‘ Pages from a Past’ May 8
Latest posts in the same category
News