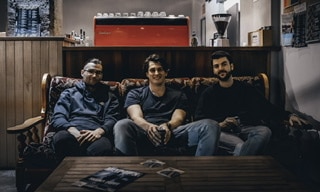 Combining unrelenting groove with a passion for heaviness and harmony, Tassie born/Melbourne based three piece Verticoli have once again served up a slab of hard hitting alt-rock with ‘End of Days’. Having toured heavily across Australia, supporting bands such as Born Lion, Cog, Kingswood, DZ Deathrays, The Delta Riggs and British India, we ask Verticoli what makes up their dream festival rider!

#1 American BBQ is ultimate, so unlimited buffalo wings and a vegan alternative would be greatly appreciated!

#4 Lots of Maltesers. They’re about as Moorish as the Iberian Peninsula 720AD!

#5 Jez would like some darts, other boys think smoking is bad but Sam has been known to engage in a social dart in moments of weakness.

We’re always getting around the gigging scene locally and afar. Feel free to bring your snacks and dogs to our gigs!

New single End Of Days out now on all platforms.

View all posts by 27 Magazine
Older My Dream Rider: Green Pools Newer News: Due to demand, extra shows added for Patti Smith and Her Band this April
Latest posts in the same category
News