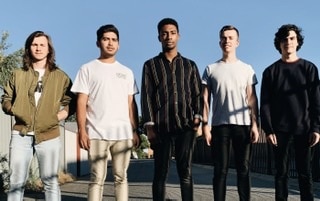 Young Robin are progressing so fast that it’s exciting to watch – anticipating what they’re going to do next, only to have those expectations surpassed. A band with an innate knack for hooks, Young Robin craft a beautiful sound that is somewhere between blissful indie and dance floor anthems. As one of Perth’s hardest gigging bands, here is their dream festival rider!

1. A Gospel choir on standby to sing any song Jed requests. Before Jed warms up his vocal cords, he must hear the sound of a good gospel choir. In his free time, Jed listens to gospel choirs performing all sorts of songs outside the usual gospel choir repertoire.

2. An all you can eat curry buffet with at least 4 different curries, any curry is fine but a beef vindaloo is a must. Jarred can’t play guitar at a show without his fix of a spicy curry.

3. A comfy chair with 7 cup holders, each with a different bevvy. It must have built in WiFi, charging ports and a VR headset. Before Tyler gets behind the drum kit, he likes to get into his hype by playing Call Of Duty, sip some RedBull and lemon lime bitters, all the while checking YouTube for the latest updates on his favourite food travel blog.

4. Banana flavoured rum ignited inside a glass goblet with banana flambé.
Sophian is all about bananas and plays guitar best after the above beverage is consumed.

5. A live sushi and sashimi bar with tuna caught from Puerto Vallarta, Mexico because tuna that comes from there is pristine. Salmon from the Atlantic Ocean, freshly caught, should also be included.
Apart from Banana rum during his guitar strumming warm-up, Sophian requires fresh seafood. He’s been to Mexico and won’t stop talking about the tuna. The rest of the band requires quiet during their warm-ups and a sashimi bar will shut Sophian up for a while.

6. Hamish requires no special food and drink rider however he and the band request that David Attenborough follow them around narrating everything that happens. This extends to a running commentary of the performance being fed to the band through the stage monitors. He will be expected to say stuff like “the slightest lapse in concentration from the musicians could be have disastrous consequences for their chances of survival.” or “a stunning performance for sure but what Jarred seems to be unaware of is that he is playing the wrong song”.

New single Tropical Punch out now on all platforms.