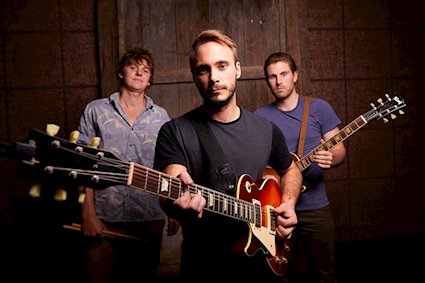 Cactus is the first single release from Lights Out West. The three piece from Geelong and Bambra, Victoria Australia, have shared in the dust and doggedness of rock and are now ready to roll again.

Formed in 2015, Lights Out West wrote Cactus in the living room with an acoustic bass guitar and drums being played on a guitar case. The lyrics were inspired by a surf trip to iconic Cactus Beach, South Australia.

‘The lyrics are drawn from a surf trip to Cactus Beach in South Australia, admiring the unforgiving and beautiful landscape of the journey. Just like the feelings you get rolling with the punches on a road trip, there is an underlying groove to ‘Cactus’ that barrels on and a song you can dial into the wireless on any adventure.’ Jared Bailey, Vocalist

Cactus represents the great Australian road trip. The rolling rhythm symbolising the long stretches of well-worn roads across the arid continent. The track builds at the approach of the destination and a robust instrumental chorus provides for the fruits of a long and hard-earned road trip. Cactus takes its name from a beach located at the eastern extent of the Nullarbor. This beach and its expansive sense of wonder are only accessible by road and the trip that ensues.

Since self-recording a demo in 2017, the band has played gigs at the RAW Artists ‘Fixate’ Festival, Airey’s Inlet Open Mic Festival, Yorkshire Hotel in Abbotsford and Black Hatt in Geelong. The Lights Out West live set is rollicking and dynamic, their collective love for rock music a compelling experience.

With the release of Cactus, the road calls Lights Out West to record an EP and perform their new songs to a wider audience.