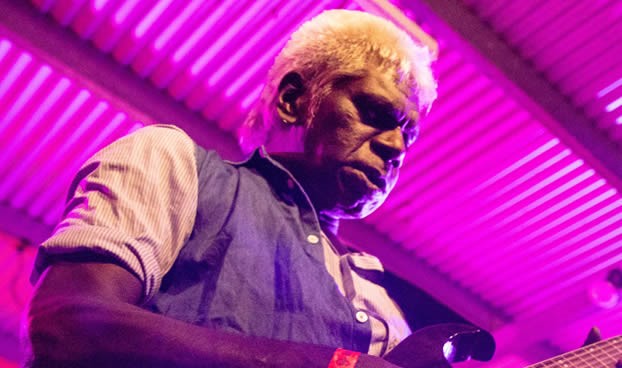 BARUNGA FESTIVAL CONTINUES CELEBRATION OF TRADITIONAL & CONTEMPORARY INDIGENOUS MUSIC
Barunga Festival will return in June this year maintaining its long and proud position as one of Australia’s most important cultural events celebrating the best of Indigenous art, sport, cultural activities, and contemporary and traditional music from remote locations.

Held over three days, from Friday, June 7 to Sunday, June 9, 80 kilometers southeast of Katherine, Barunga will attract over 4000 people from across the Northern Territory and beyond. With an audience of over 65% Indigenous attendees, the event has become an important and immersive experience for both First Nations Australians and travellers seeking unique and genuine Indigenous Australian connections.

“Family is everything to me. I grew up around it with my Dad and my grandfather. Since I’ve started making moves they come up all the time. They tell me I’ve got my father’s face. People that I wouldn’t expect. Now that I’m on a similar path as them, I can see how hard they would’ve worked, and I’m proud to step up with them,” said Gumbaynggirr rapper, Tasman Keith.

This year, the people of Barunga have also extended an invitation to the Indigenous cultures of Taiwan, welcoming singer Sang Mei-Chuan from the Twainese Paiwan tribe.

Sang is the youngest child of her family, and due to the senior age of her parents only spoke in her native tongue until schooling age where the government enforced a policy forbidding her to speak in her mother language.

Now, she works from her studio in Chingshan village teaching children the traditional songs of the Paiwan people and will bring the story of that unique experience to Barunga.

“Music is of great importance to the Taiwan Indigenous Peoples, especially to the Paiwan tribe. Music and songs not only record our daily lifestyles and express emotions but also record our histories, beliefs and cultural identity,” said Sang Mei-Chuan. “Tribal music and songs are like roots that absorb the nutrients from the land in Taiwan. For those Indigenous groups that do not have writing systems, music and songs are one of the most important mediums in passing down their cultural identity.”

The event has a healthy food policy, with a range of cuisines on offer as well as 100% drug, smoke and alcohol-free policy to ensure the family spirit of Barunga community is maintained.

Barunga is a real community, welcoming you to their home to celebrate all that is great about being Australian through their eyes. Whether you fly, drive or walk, make sure Barunga is on your calendar this June and it will change the way you see Australia.