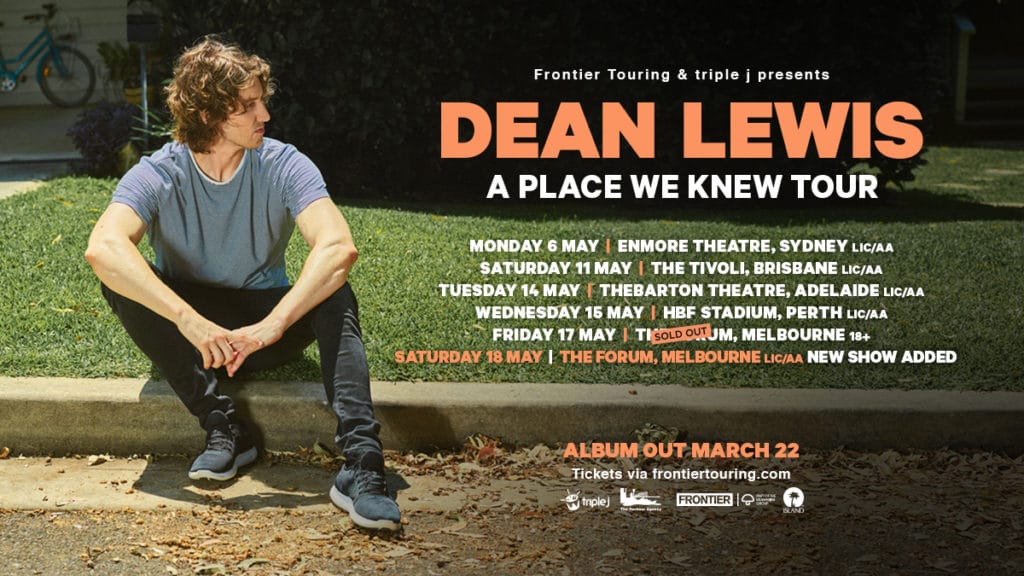 Due to overwhelming demand a second Dean Lewis concert has been added in Melbourne for Saturday 18 May at The Forum. In additional exciting news for Dean’s younger fans, the show has also been confirmed as a licensed/all ages concert.

Tickets for the new show go on sale on Tuesday 26 February at 10am AEDT.

Dean will return home to Australia in May, in support of his recently announced album A Place We Knew (out March 22 through Island Records).

Still on a high from his song ‘Be Alright’ being voted #6 on triple j’s hottest 100, Dean’s current single ‘7 Minutes’ is now certified GOLD in Australia. Written in London in an Uber following a disagreement with a girl, ‘7 Minutes’ launched its way to the top spot of #1 on TMN Hottest 100 Airplay Chart for 2 consecutive weeks and has accumulated over 25 million streams in just over 4 weeks. ‘7 Minutes’ along with his global hits 6 x Platinum ‘Be Alright’ and 5 x Platinum ‘Waves’ will be included on Dean’s debut album.

With over a billion streams of his music globally and being named Billboard’s “Chart-Breaker” in October, Dean has been dominating charts all over the world with his single ‘Be Alright’. In Australia, ‘Be Alright’ was the second highest selling single from an Australian artist in 2018 and the fourth highest selling single of the year overall. Globally the single has now reached over 630 million streams achieving multi-platinum, platinum and gold status sales worldwide.

Don’t miss out on tickets to see Dean in May for his A Place We Knew National Tour.
DEAN LEWIS
A PLACE WE KNEW ALBUM TOUR
MAY 2019
Presented by Frontier Touring & triple j
Monday 6 May
Enmore Theatre | Sydney, NSW
Lic. All Ages
ticketek.com.au | Ph: 13 28 49

Saturday 18 May
The Forum | Melbourne, VIC
Lic. All Ages | NEW SHOW!
ticketmaster.com.au | Ph: 13 61 00
On-sale Tuesday 26 February 10am AEDT
Patrons are advised to purchase tickets only through authorised ticket sellers.
We cannot guarantee any ticket purchase made through any means other than
the official ticketing agents listed on the Frontier website.
DEAN LEWIS – A Place We Knew
(out Fri 22 Mar)
Ticketbuyers will have the option to pre-order a physical CD album or vinyl copy of A Place We Knew when buying tour tickets!