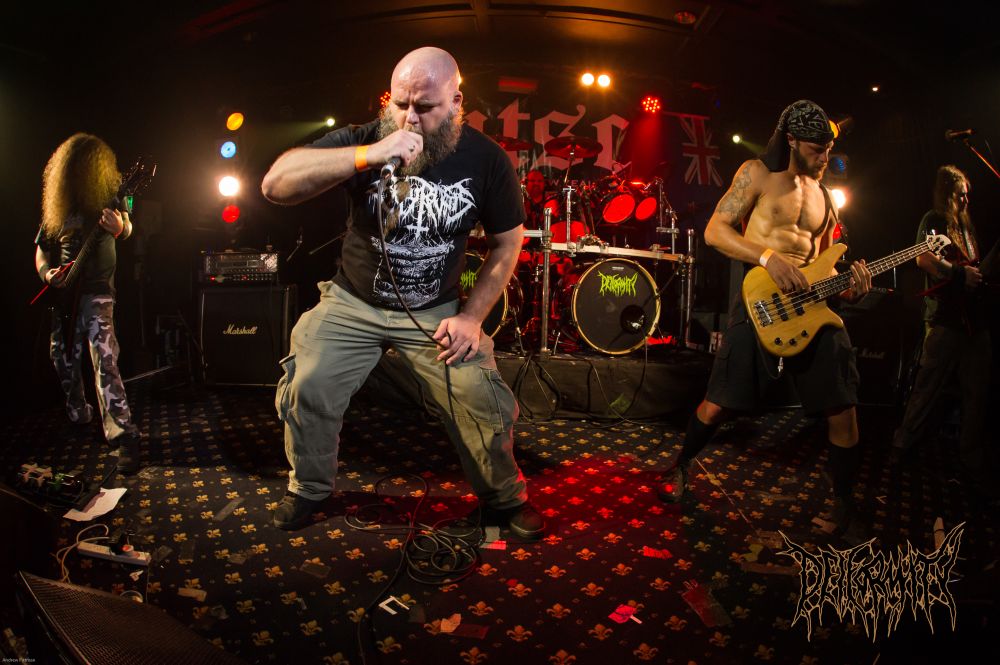 Sydney’s Deiformity just released their crushing debut album Corpse Stomper– 11 tracks of heavy and catchy old school death metal. Their album includes the single Master of War which is a tribute to Bolt Thrower. Deiformity‘s singer Loz explains why they included a tribute: “A few years ago, Bolt Thrower were meant to be touring Australia for the first time since the 90’s.  Due to the tragic and sudden passing of Martin “Kiddie” Kearns, they were obliged to cancel this tour. Stricken by grief, they decided to honor him by burying Bolt Thrower with him, a decision we all respect and in turn felt was worthy of it’s own recognition. We wanted to salute Kiddie Kearns.”

The lyrics speaks for themselves and purposefully incorporate a few distinctive Bolt Thrower phrases and titles any of their fans will recognize. “This song is about Death Metal”, Loz explains further. “It invokes the inner joy of being up front moshing with a drink in your hand, raising your horns and the brotherhood we all know because of his music.”Deiformity stream their single via Youtube –

Formed in 2016,  Deiformity is an old school style Death Metal band based in Sydney, Australia. The majority of band members are Sydney Death Metal veterans with Loz Lamy (Hell Itself), Paul Ibbotson (Daemon Fetal Harvest),  Age Williamson (Viscera), Chris Tuckley (New Blood, Bloodbomb) and newcomer Rob Piersen. Founded on the principle of writing the heaviest and catchiest old school style Death Metal they can for a live audience.  This is not a band for chin strokers; this is a band for all the headbangers out there!

2018 proved to be Deiformity’s biggest year yet with a string of live shows and international supports (Cattle Decapitation and Psycroptic). With their first album released, Deiformity is ready to stir the live circuit to cement their Death Metal presence world wide. Next show to see them live is Gridfest in Sydney on 24 November.