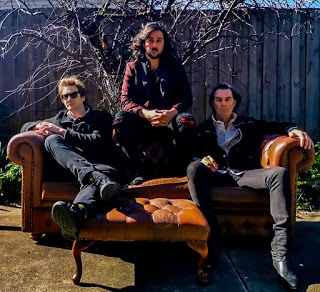 Grasshole are a stoner-punk three-piece from Melbourne that exemplify the hard work required to make it in today’s music industry. Since the release of their debut EP (Grasshole), a second EP (The Unification Proclamation), and their debut album (Fuzz of Flavour) the band have completed three national and two international tours, playing shows across Spain, Sweden and Indonesia, including several festivals. The tour for their debut album spanned 85 shows across a year and a half. They have since developed a reputation for a high-octane live show that has gained a very strong following both locally in Australia and internationally.

“Playing music has always been my first choice for spending the biggest currency I have… my time. Everyone has a different outlet that gets compromised at one point or another, because of how fast and crazy the world is these days.” – Karis Hawkins (vocals/guitar)

Grasshole’s back catalogue has earned them a significant amount of spins on community radio in Australia and college radio in the US. Their 2nd EP, The Unification Proclamation, was added to rotation across 90 US Radio Stations and even debuted at #1 on a handful of them.

Wildfire was recorded in the beautiful Aussie countryside of the Dandenong Ranges in Victoria over 11 days at Beveridge Road Studios with Marc Russo at the helm. They lived and breathed the tracking for the better part of two weeks, sometimes pulling 16 hour days to bring all the guitars and harmonies to life. Peerless producer Lindsay Gravina (Hole, Jet, Cosmic Psychos, Violent Soho) mixed and mastered the entire album, taking the songs to a whole new level of Garage fuzz-Punk glory.

“These songs and performances capture the spirit of the 90’s as well as anything I’ve worked on these past few years, but with a few surprising twists!” – Lindsay Gravina (mix/mastering engineer)

“We feel this is our strongest album to date. Every song stands up with conviction. Whilst there’s a range of unique song styles permeating the album, it all fits together in typical Grasshole fashion.” – Rick Hawkins (drums/backing vocals)

Interestingly, Jack Howard from iconic Aussie band Hunters & Collectors happens to be old school mates with Grasshole drummer, Rick Hawkins. Rick made the call and Jack ended up laying down the blistering horns that really make this album swing.

“I wasn’t sure what to expect when old school mate Rick Hawkins asked me to record with his band Grasshole. What I got was a cracking bunch of concise, inventive, hook-laden songs full of equal parts heavy riffage and melody. It was a pleasure to play trumpet on a few tracks.” – Jack Howard (trumpet – Hunters & Collectors)

Wildfire will be available on vinyl and all digital platforms March 4th, 2020