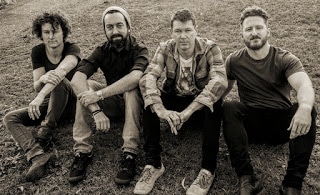 Brisbane-based band The Rockefeller Frequency create energetic indie-rock music fueled by anxiety, loud guitars, and an uneasy sense of pending doom. They combine influences from musical artists such as Nirvana and The Strokes as well as writers such as George Orwell. The band have recently returned after a hiatus of several years.

Having time off was rewarding for the four piece, supplying them with many rich life experiences as well as subject matter for their upcoming debut album, Chemicals. New single, “Good Apples” follows in the footsteps of previous singles “The Rift” and “Sheep and The Wolf”. It’s the third track to be lifted from the debut record before its release in March.

“The new single ‘Good Apples’ is a redemptive tale that starts in a very dark place, with a protagonist that has basically given up on everything. He contemplates his endless mistakes and somehow figures out how his life could be worth living, and actively seeks it out. It’s not all bad in the end, which helps in relaying these types of stories. It’s positive, but you have to work through a lot of garbage to get there, just like real life.”
– Joshua Eckersley (vocals)

With a true punk rock ethos, the single has been a full DIY journey from inception through to its release. The recording process took place in the band’s own Basement Studios in Brisbane, and was engineered and produced by the band also along with the bulk of their yet to be released debut album. “The beauty of doing it yourself,” says Joshua Eckersley, ”is you can take your time, and try some really weird shit, and you don’t have to answer to anyone or worry about money. You just create art, go about your day, then do it again.”