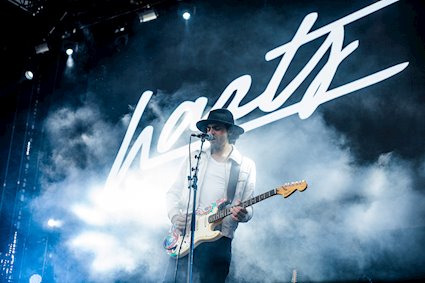 Harts is soon to play his ‘Harts Plays Hendrix’ performance at the Melbourne Recital Centre, and shares a live video of his ‘Foxey Lady’ rendition here

“Harts is the real deal. He has the tools to lead a new generation that our world has never seen” – Austin Hendrix, nephew of Jimi Hendrix

The reverberations of Jimi Hendrix’s singular expression of history, culture and social connection endures today as a new generation thrive on his music as a source of discovery and fulfilment. That same vivid spirit of song is still heard today in Australian musician Harts. Harts has garnered constant comparison to Hendrix with his expansive explorations of funk, rock, jazz, blues and psychedelia. Now having rocked the Sydney Opera House steps and fresh from lighting up Triple J studios with Denzel Curry for Like A Version, Harts is set to electrify the Melbourne Recital Centre’s Elisabeth Murdoch Hall in May.

I’’m very excited to be putting on this special show. Jimi’s music and playing has always been a big inspiration and influence on my own style as an artist and guitarist. It’s going to be a thrill paying tribute to the iconic music legend by performing and really showcasing his work in a show like this. I think Hendrix fans, Harts fans, lovers of classic rock and the guitar are really going to enjoy this show.’- Harts

This premiere live performance celebrates the 50 year legacy of Jimi Hendrix and pays tribute to the anniversaries of his studio albums while bringing the distinct flair of his iconic performances as only Harts can. The show consists of a carefully curated setlist from Jimi’s entire catalogue, performed live by Harts in a powerful three-piece band experience, and guest appearances by some of Australia’s most revered musicians. Details to come.

Darren Hart, professionally known as Harts, is an acclaimed musician, singer/songwriter, multi- instrumentalist and music producer. Over the years, Harts has established himself as one of Australia’s finest young talents, composing, recording and producing three studio albums, two EPs and a live album, securing three #1 most played songs on Australian radio station Triple J, as well as being awarded a GQ Breakthrough Artist Of The Year award in 2016.