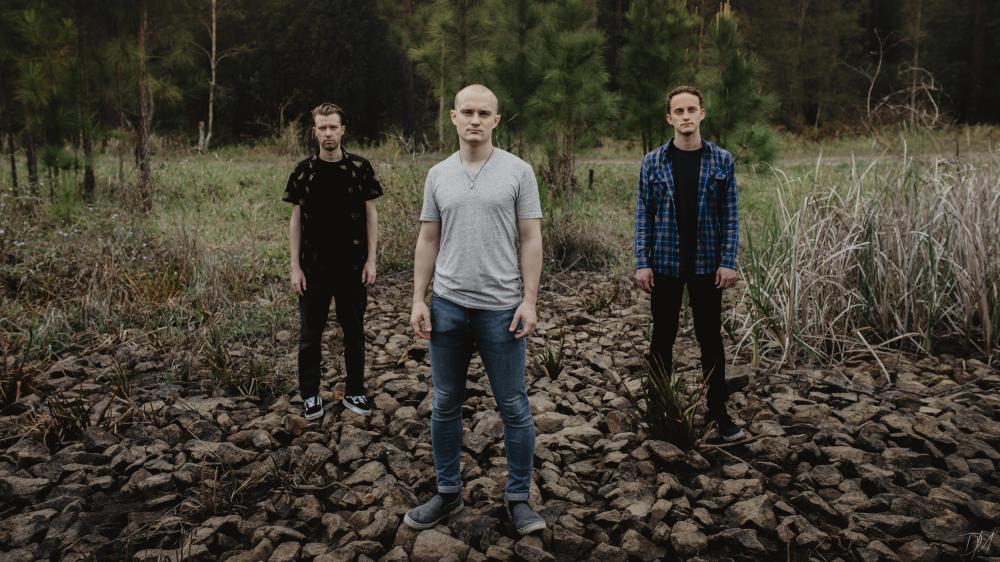 Brisbane’s inovo are today releasing something that has been in production/the creation phase for over a year. A mammoth undertaking of indie film-making, not even to mention the carefully-crafted, brooding and atmospheric prog/rock music that accompanies it.

The three-piece Alt-Prog band based in Brisbane, Australia, who formed in 2015, are releasing their new single “The Day is Coming” alongside a filmclip that, on a shoestring budget, a desire to make something different and brilliant, and a vision that they did not compromise on, rivals that of small film companies. With the release of this music video, “The Day is Coming” uses otherworldly visuals coupled with an intense musical narrative to create a captivating audiovisual experience.

Rhys Tyack, guitarist for the band said that, “A year ago, when we recorded the song, we wanted to film something story driven because of Declan’s vivid lyrical concept. We reinterpreted the core themes of the lyrics with how we could make it come to life, in combination with the practicality of actually making the thing on a low budget. We wanted the central character (X) to have a sense of mystery like an old horror movie, while also confronting, so that initial impressions are aesthetically informed. In contrast to X, we created character Y to be more about being initially pleasing to the eye. As the music would tell the story through sound, we thought of using colour to be the way the characters communicate.”

The band drew inspiration from The Elephant Man, in the greyscale and desaturation which matched Joseph Merrick’s disposition. Alongside that, they drew influence from the colourful scenes of Japanese film, Kwaidan, reflected emotion and story through colour – and aimed to combine these aesthetics to create a sense of surrealism in the outer-worldly, yet somehow remains oddly familiar.

Rhys went on to explain more about the clip. “Relating the concept and the song structure as a timeline we devised three environments around Brisbane which would be striking in different colour. Initially we decided to progress the story we would go from colours blue to green to red, which later changed to yellow.” The fantastically scenic clip was shot in three locations surrounding Brisbane – Close to Springbrook around Hinze Dam, the pine forests in Beerburrum and the sand desert dunes of Fraser Island.

inovo are also supporting Opus of A Machine at The Brightside in Brisbane on December 1 as they play their album “Stray Fire” in full.

inovo have played shows alongside The Stranger, OPIA, Balloons Kill Babies and supported the charity Beyond Blue with a sold out benefit show in celebration of the life of Chester Bennington, at Brisbane’s Crowbar. They draw influence from a variety of artists such as Karnivool, Porcupine Treeand Tesseract. Their emphasis on fear-based storytelling is complemented by irregular rhythms and haunting tonalities. inovo are constantly reaching new heights with their unique and captivating sound.

Single “The Day is Coming” is out today in all good digital stores and streaming outlets and tickets for Opus of a Machine’s show at The Brightside on December 1 are available now – inovo are supporting.

INOVO – SUPPORTING OPUS OF A MACHINE
1 DECEMBER 2018 – THE BRIGHTSIDE, BRISBANE