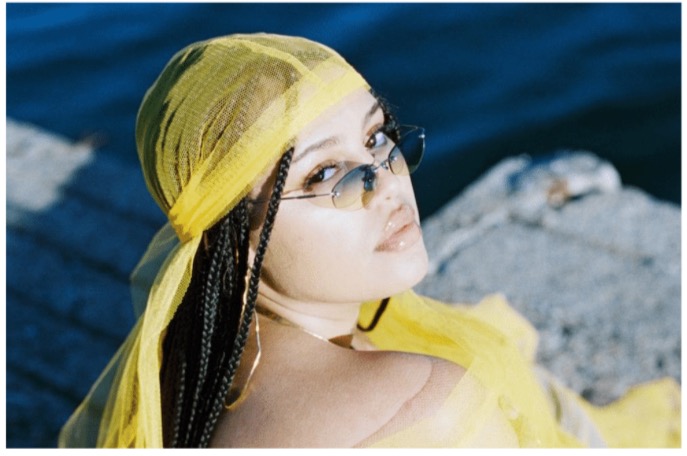 Lil Halima is making the kind of dreamy bedroom sound waves that are reminiscent of being folded slow-motion into your duvet. And
we’re ready to becoddled for -Norwegian artist Lil Halima
has released her EP for the bright days, the counterpart to her earlier 2019 EP for the dark days.
The two-part release explores the two sides of the year living above the Polar Circle in northern Norway, where there is either constant
darkness or light, and how it affects our relationships.
Today’s release–for the bright days–is a light-filled tribute
to summer and the freedom it brings. The first track on the EP is the single‘who do u love,’followed by ‘yung luv,’ which explores the confusion of fleeting feelings and features fellow Dew Process artist
AMWIN. The final track on the EP, ‘don’t cry,’features Lil Halima’s melodious vocals, interlaced with piano and delicate synths.

Lil Halima also released the official video for her single’ who do u love.
Reflecting the song’s lyrics, the video for ‘who do u love’
is a warm celebration of the various types love in someone’s life. It was directed by Lil Halima and creative collective 8392 (Marc Jacobs, JW Anderson, Isabel Marant)
Of the video, Lil Halima says,
“I wanted a music video that would simply just convey the message of the song, remembering who you love. It was important to me that it was done effortless. So just a lot of love. Good and bad,friendships and
relationships. I wanted myself in the video, to represent the feeling. Red, like love or anger.
”2019 has been an exciting year for Lil Halima so far–with two EP releases, a headline slot at Norway’s By:Larm festival and a European
tour announced, including September shows in Paris, London, Amster
dam and Hamburg.

She released her debut EP love songs for bad lovers last year, which received a nomination for the Nordic Music Prize Award and
Lil Halima a nomination for the Norwegian Grammy Award for ‘Best Urban Act’. The seven-track EP centred around the experiences
of falling in love for the first time, contained singles ‘Train’ and
‘Jasmine.’

Lil Halima has had a fervent critical following in Australia since she signed with Dew Process in 2018 off the back of the release of her
commanding single ‘Train.’ She’s gone on to have amazing support from radio and streaming outlets, as well as local tastemakers
including Monstet Children, MTV,The Interns,Women In Pop,
Project U,Purple Sneakers, and Pilerats- just to name a few. She’s also had massive international support from the likes of i-D, Wonderland, and the mega-streaming outlet, Colors.
It’s all destined to see Lil Halima to reach inevitable superstar status. In the meantime, she continues to make the best pop on the planet,
from her little corner of the globe, and continues to be an artist that’s out of this world.