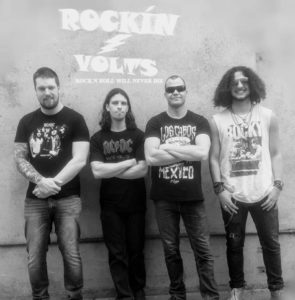 In a music scene where a veritable  plethora of bands exist all trying to reinvent the musical wheel the true essence of music is quickly becoming swallowed by a generation that believes more is superior.
This is not the case for Melbourne’s Rockin’ Volts who wear their inspiration and heritage proudly on their hard-rockin’ shoulders and these guys have a mission, and that mission is good old fashioned Rock n Roll. They have recently released our debut lyric video and released an EP the self- titled ‘ Rockin’ Vaults’ .
The self described misfits are beer drinkin’, guitar razin’ Aussie Pub Rock N Roll band from Melbourne consisting of  four guys, 2 guitars, bass, drums & vocals. They are a loud in your face high energy rock n roll band and they are here and they ain’t going anywhere! With an initial aim to reinvigorate the Melbourne hard rock scene, Rockin’ Volts have already declared that is just the first stop on global domination.
The bands drummer Dean enthusiastically describes the song ‘”Rockin Volts’ is about paying homage and salute to the bands that came before us such us AC/DC, The Angels, Rose Tattoo etc. We wrote it cause we are here to bring back Aussie Pub Rock N Roll and like the opening line says “Bring back rock n roll to the scene” and thats what we are gonna do.”
After recent personnel changes that have only enhanced their musical psyche, Rockin’ Volts start that journey with their self titled debut EP which is out now. Lathered in sweat and dripping with vicious slabs of rock, ‘Rockin’ Volts’ is an EP harking back to the glory days of Australian rock where men were unafraid to bare their teeth and women were unafraid to put them back in their place.
The band released there  debut EP ”Rockin Volts” in September, so go onto Spotify and listen to our rockin EP or come grab it at a show near you! TURN IT UP!!
https://open.spotify.com/artist/4Hs2OTXqh7l3ojyZcTR4sY
https://www.youtube.com/channel/UC7ixfhToTJ87SUkWHyVnuiQ
Rockin’ Vaults are:
Drums: Dean Weedon
Vocals/Bass: Hayden Scott
Guitar: Dylan Stevens
Guitar/Vocals: Tyler Theo