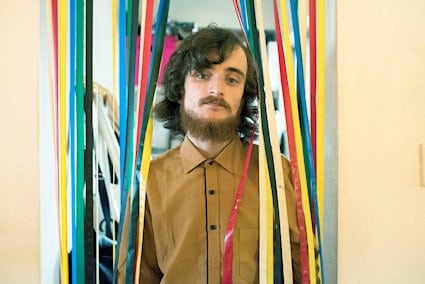 Following up on the solo debut of Don’t Give Them Any Reaction, Robert Jeffery returns with a single a that simultaneously furthers the range of his songwriting and deepens the scope of his classic rock references in This Time.

Tracing the tropes of 80’s classicism with re-invigorating entendre and refreshingly modern values, This Time is reflexive and rocking. Jeffery’s attention to detail and desire to suffuse confident energies with widely relatable themes fosters a dynamic entanglement of Muse and Supertramp.

Recorded at Valleysound Studios with producer Pete Dyball (Kasey Chambers) the track can be interpreted in a number of ways with the core theme surrounding preoccupation with a person or object and how exhausting it can be.

‘Sometimes there is something or someone in your life who you just cannot get out of your mind. It may be because you admire them or it could be because you despise them. Either way, they are riding your train of thought without a ticket and you can’t kick them off.’ – Robert Jeffery

His songwriting style of pushing for loud, thundering guitar riffs was suddenly met with a desire to explore old-school styles, tones and melodies. These desires grew as the influence of groups such as The Beatles, The Beach Boys and Foxygen pushed his creative comfort zone out into new territory which was eventually revealed in his 2019 introduction Don’t Give Them Any Reaction which received national airplay across Australia’s Community Radio Network and was also featured on international stations KOR and Uckfield FM in the United Kingdom Robert works out of a home-studio in Coffs Harbour, NSW. It is there that he composes music and records demos to provide a guide for when he takes his songs to a producer to be recorded properly. This has allowed him to hone in on his on a sound over time and focus on performance when it comes to recording.

After a car accident in 2013, he found himself taking everyday life and music a little easier. Robert is working towards expanding his release catalogue and is currently putting together a band to play shows in the Mid North Coast area. He looks forward to jumping back into live performance and sharing his music with the world however he can.

‘…What a treat! Can definitely see why you’ve put The Beatles in your influences’ – Claire Mooney, Triple J – Australian Music Producer

‘This Time’ by Robert Jeffery is out now.