News just in: Queenscliff Music Festival 2018 has sold out for another year.

And it’s no wonder as this year’s program is jam packed full of critically acclaimed artists, including 2018 ARIA Award nominees Courtney Barnett (Apple Music Album of the Year, Best Australian Live Act, Best Rock Album, Best Independent Release and Best Female Artist), Tom Ballard (Best Comedy Release winner), Kasey Chambers (Best Country Album – and she’s about to be the youngest female recipient to be inducted into the ARIA Hall Of Fame) and the Teeny Tiny Stevies are up for Best Children’s Album.

2018 marks the 22nd annual Queenscliff Music Festival. The festival will run from November 23-25, and across the Friday, Saturday and Sunday the beautiful Bellarine foreshore will be bursting with music and comedy. 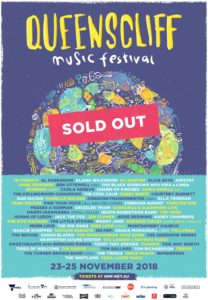