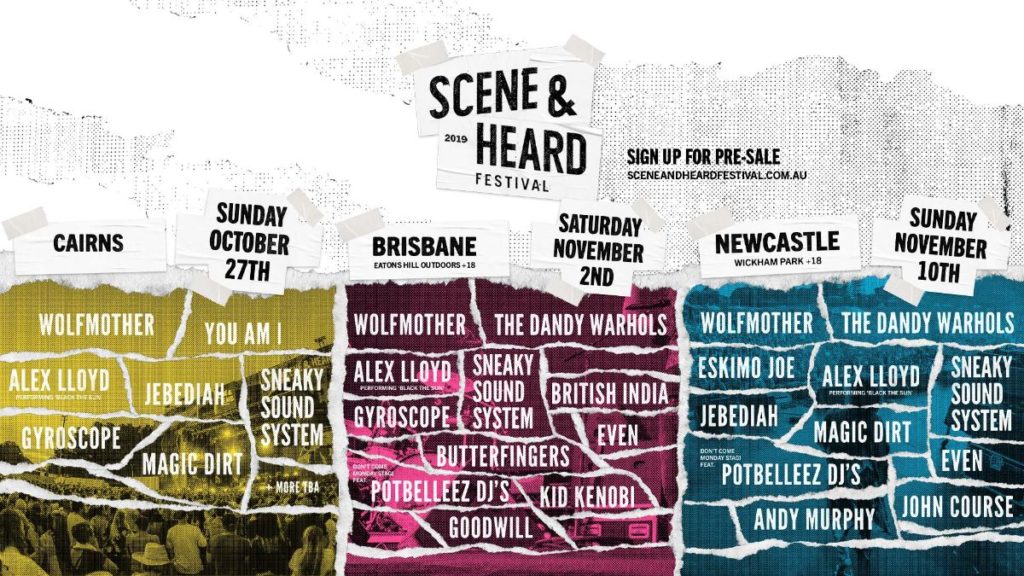 After announcing an interstate expansion last week, the hotly anticipated line up for SCENE & HEARD has landed. Hitting three locations including Cairns, Brisbane and Newcastle this October and November, festival organisers have locked in three unique line ups worthy of an early noughties wet dream.

Wolfmother lead the charge. Fresh from an international tour and a performance at this years Splendour in the Grass, the band will headline all three SCENE & HEARD locations. From the moment the electrifying riff kicks off in ‘Joker and the Thief’ to the psychedelic breakdown in ‘Woman’, Wolfmother’s epic catalogue is tailor-made for the ultimate festival experience.

Celebrating their 25th Anniversary as a band, The Dandy Warhols (USA) bring their flamboyant party jams including ‘Bohemian Like You’ and ‘We Used To Be Friends’ for a co-headline at the Newcastle and Brisbane legs of the festival. Also marking a milestone, Alex Lloyd joins the ranks to celebrate the unmissable 20th anniversary of the ARIA Award Winning, double platinum-selling Black the Sun as he plays his debut album in full across all SCENE & HEARD dates.

Cairns celebrates another endless summer with the only SCENE & HEARD appearance by the inimitable You Am I. And Newcastle is in for a treat with Eskimo Joe, bringing the heat. With an ARIA award-winning catalogue spanning six studio albums and career sales in excess of 750,000 records this Perth powerhouse will bring sing-a-longs galore. Crowd favourite Sneaky Sound System impressed everyone so much at SCENE & HEARD 2018 that festival organisers are welcoming Connie and Black Angus back again. They’ll be running up smash hits like ‘UFO’, ‘Pictures’ and ‘I Love It’ across all locations. Jebediah bring their roaring riffs and soaring pop hooks while fellow West Australians Gyroscope join the party as do fellow rockers British India, Magic Dirt and Even with hip-hop royalty Butterfingers bringing it home.

Newcastle and Brisbane also host the Don’t Come Monday Stage – a party zone designed to evoke only the best memories of the boiler room. Championed this year by The Potbelleez DJ’s it features some featuring the likes of Kid Kenobi, Andy Murphy, Goodwill and John Course.

SCENE & HEARD is creating more than a festival. It’s creating a connection to a time. A time before people cared about ‘likes’, and festival moments weren’t instagram opportunities but collective memories. Those wanting to create new memories and relive the old ones can head HERE to register for the SCENE & HEARD presale.