News: Short Stack announce Australian Reunion tour | Between You & Me to support | July 2020 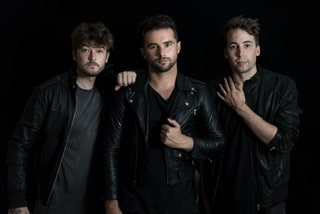 Frontier Touring announces Short Stack reunion tour for July 2020
Short Stack will perform nationally for fans in Brisbane, Melbourne, Sydney, Adelaide and Perth
Short Stack’s 2020 reunion tour marks the band’s return to the stage for the first time in four years
Australian punk band Between You & Me will support Short Stack for each show
Frontier Touring is thrilled to announce that Short Stack are back! The band will headline five national shows across Australia this July in the wake of their reunion. This news comes four years since the band reunited in 2015 with the release of their Homecoming album.

The band, comprising of Shaun Diviney, Andy Clemmensen and Bradie Webb, has come a long way from humble beginnings in a garage in Budgewoi on the NSW Central Coast. They will bring their iconic arsenal of rock anthems to audiences at Brisbane’s The Triffid on Thursday 2 July, Melbourne’s 170 Russell on Friday 3 July, Sydney’s Metro Theatre on Saturday 4 July, Adelaide’s The Gov on Friday 10 July and finally at the Astor Theatre in Perth on Saturday 11 July.
“I don’t think we’ve ever been more excited for a tour. The early response has blown us away and we can’t wait to see everyone in July!” – Shaun Diviney, Short Stack lead vocalist and guitarist

VIDEO: ‘Sway Sway Baby’ by Short Stack
Short Stack made their mark on the Australian rock scene with their debut album Stack Is The New Black in August 2009. Stack Is The New Black received Gold certification and peaked at #1 on the ARIA Charts. Just over a year later the band dropped its Platinum Certified Planets EP in September 2010, followed by its second Gold-certified album This Is Bat Country in November 2010.

Joining Short Stack for each of their five headliner performances will be Australian pop-punk band Between You & Me, best known for their track ‘Dakota’ which has accrued more than 4.1 million streams across Spotify and Youtube, earning them a combined audience of 160k monthly subscribers. Between You & Me have performed a completely sold out Unplugged Tour and have previously supported the likes of Neck Deep, The Maine, Tonight Alive and Trash Boat.

Don’t miss your chance to experience one of Short Stack’s first performances in four years, tickets go on sale next Thursday 13 February from 2pm local time.
SHORT STACK
WITH SPECIAL GUESTS BETWEEN YOU & ME
AUSTRALIAN TOUR
JULY 2020

Patrons are advised to purchase tickets only through authorised ticket sellers.
We cannot guarantee any ticket purchase made through any means other than the official ticketing agents listed on the Frontier website.