News: SOMETHING FOR KATE NEW ALBUM ‘THE MODERN MEDIEVAL’ OUT TODAY

HomeNewsNews: SOMETHING FOR KATE NEW ALBUM ‘THE MODERN MEDIEVAL’ OUT TODAY
News 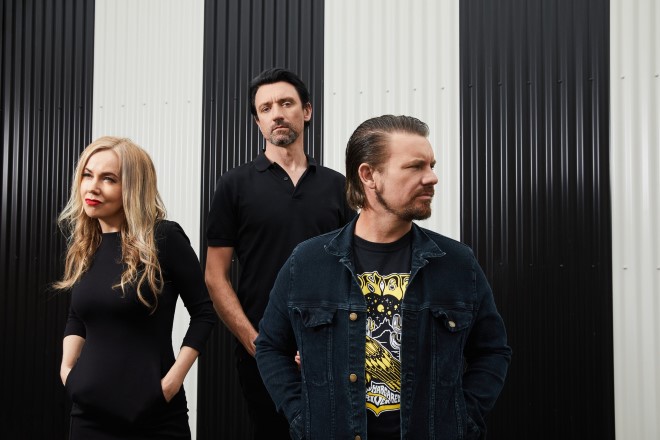 Melbourne trio Something for Kate’s career has spanned over two decades and yet their most accomplished and most highly anticipated album The Modern Medieval is released today.

Their first album in over 8 years since 2012’s Leave Your Soul to Science, The Modern Medieval was recorded in Byron Bay by Nick DiDia (Powderfinger, Pearl Jam, Bruce Springsteen) and mixed in Toronto by Canadian electro-pop auteur Howie Beck (Feist, Hayden, Chilly Gonzalez). An exciting, eclectic collection of songs, a rich hi-fi rush of warm, dynamic vocals, gorgeous guitar work, lush keyboards, and Dempsey’s always razor-sharp wit and compelling story telling – The Modern Medieval finds the band of Paul Dempsey, Stephanie Ashworth and drummer Clint Hyndman united behind a renewed focus and producing songs such as the anthemic ‘Situation Room’, ‘Waste Our Breath’, ‘Supercomputer’ and ‘Come Back Before I Come Back To My Senses’.

The Modern Medieval brings together three closely-knit musicians, moving in parallel lines leading to a work of sustained and stunning invention. Few bands have spanned multiple eras of Australian music as Something for Kate have, and even fewer have refused so stridently to be cosseted by their past. It’s a rare achievement to be this engaging and formidable.

Compelling, transformative and beautiful – for both the listener and the band – The Modern Medieval is an electrifying salve for these strange days and a new benchmark in a legendary career. Offering an unprecedented depth of songwriting, it’s a prescient vision of our present times that you’ll need to hear and hear again.
WATCH THE ALBUM TRAILER HERE

“We make Something for Kate records because we love making them,” says Paul Dempsey. “Every song we work on is a concentrated effort. It has to be right. For me, that means not a word out of place and not a note out of place. That takes a lot of time, but no-one lets anything slide in this band.”

“It’s the most eclectic mix of songs we’ve had on an album,” confirms Dempsey, and to translate them Something for Kate took a multi-step approach. They began by recording tracks with noted engineer and producer Nick DiDia at his hilltop La Cueva studio outside Byron Bay, they then took a month’s break to live with the songs and add layers at home before decamping for Toronto, where Canadian producer Howie Beck, brought his mastery of avant-garde electronic pop to the mix. It’s an unexpected combination of collaborators, but it signifies Something for Kate’s refusal to compromise or do the predictable. In a band where Dempsey’s toughest critics are his bandmates, they had no time for convention.

Something for Kate’s DNA is still undeniable – but their desire to improve is tangible. Stephanie Ashworth says that Dempsey’s voice, a force of nature at live shows, has never sounded better recorded, and that serves to amplify lyrics that compress daring detail with shuddering brevity and sharp wit.

Something For Kate’s is a career that continues to excite. Since arriving in 1994 with their singular deconstruction of indie-guitar rock, the trio have bent the Australian musical landscape to their will, becoming a critically-acclaimed institution predicated on sticking to their guns. After their nervy 1997 LP debut Elsewhere for 8 Minutes confirmed a cult following with well beyond gold sales, the band’s records have made a consistent dent. Echolalia (2001) and The Official Fiction (2003) both went beyond platinum status in Australia, while albums – Beautiful Sharks (1999), Desert Lights (2006) – achieved beyond gold sales heading towards platinum. 2012’s Leave Your Soul to Science debuted at No. 5 on the ARIA charts.

With over 750,000 copies sold of their critically acclaimed back catalogue, the band have amassed 11 ARIA nominations and 14 entries in triple J’s Hottest 100 amongst other accolades – as well as a legion of loyal fans dedicated to whatever the band does next, however long the wait.

SOMETHING FOR KATE – THE MODERN MEDIEVAL – OUT NOW