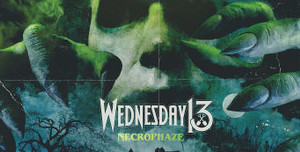 The Duke of Spook has returned once more from beyond the grave to reveal the »Necrophaze«! This latest, full length offering from the ghouls of WEDNESDAY 13 will be available on September 27th, 2019 via Nuclear Blast Records. Heavily influenced by the real life night terror occurrences ofWednesday himself, historical serial killers, and a slew of 80’s horror films, the ideas behind »Necrophaze« are bizarrely familiar, frightening, and a hell of a lot of fun. Being a collector of both media and toys, Wednesday 13 was inspired by a craving for variety to create dual album artwork for this release. The covers showcase either end of the horror spectrum with a “Creepshow” comic book vibe for the LP artwork, and the eeriness of something akin toJohn Carpenter’s “The Fog” adorning the CD.

The recurring themes of »Necrophaze« illuminate facets of real life horror. With the death of NECROPHAGIST frontman & friend Killjoy earlier this year, and while creating the mold for a new stage-show mask, the development of the ‘Necrophaze’ character and story naturally began to take shape. “It always starts with a title for me,” explains Wednesday, and from there began digging into a variety of terrible subjects. The title track is not just an introduction to the character, but to the terrifying circumstances of sleep paralysis. Left not just unable to move, but unable to protect yourself from the ‘shadow people’ who crowd around your nest, these figures don’t just hover and give you a fright, but will suck away your soul and implant an evil haze in the chasm that remains. “A shadow is just a shadow until you put a face on it and you can’t move. Then it becomes pretty freaky,” Wednesday explains. “A lot of »Necrophaze« is my own nightmare, but we’ve worked some history in there as well, it’s not all fantasy.”

While still consistently horrifying, this new album certainly carries with it a more humorous sentiment than its gloomy predecessor (and first album with Nuclear Blast Records), »Condolences« (2017). Songs like ‘Bring Your Own Blood (BYOB),’ clearly a play off the phrase “bring your own booze,” manage to intertwine opposing ideas of the blood sucking undead with a teenage house party. “In every 80’s horror movie there’s always a party,” Wednesdaychuckles, “so we wanted to get that vibe. The title made me laugh so we wrote a song that’s sort of a more violent ‘Monster Mash.’” The first single‘Decompose,’ which was initially written by drummer Kyle Castronovo, and was also the first song/demo brought to the table, is like a catchy anthem for the idea of “I know you’re dead, but I really wish you could be deader.”

This time around the recording and mastering was completed with Michael Spreitzer; producer, recording engineer, as well as the long time guitarist ofDEVILDRIVER. Working locally allowed WEDNESDAY 13 something they had never really enjoyed with their prior recording experiences: comfort and time. Being able to leave each day, sleep in their own beds, and come back again with fresh ideas, played an important role in the exciting, yet low stress development of the album.

With the same line-up for 9 years (with the exception of drums about 5 years ago), the writing process for WEDNESDAY 13 has developed itself into the apparatus that it is today. As literally every member contributes to the song writing process, and with a drummer who also plays guitar, the writing is shared quite evenly throughout the band. “Once things are brought to the chopping block, then the dots can all be connected, and songs can be developed,” explains Wednesday. “It’s all for the sake of a good song. A lot of times they’ll create the backbone and then I come in to do the lyrics. That frees up a lot more time for me to be creative with the band as a whole.”

With literally every show selling out on the latest run of 2019 touring, 2020 will deliver plenty of opportunities for WEDNESDAY 13 fans to see the band tour, and to witness their ever developing stage show. Dropping just in time to enjoy on Halloween, creepsters of the night, prepare yourselves, to ENTER THE NECROPHAZE.