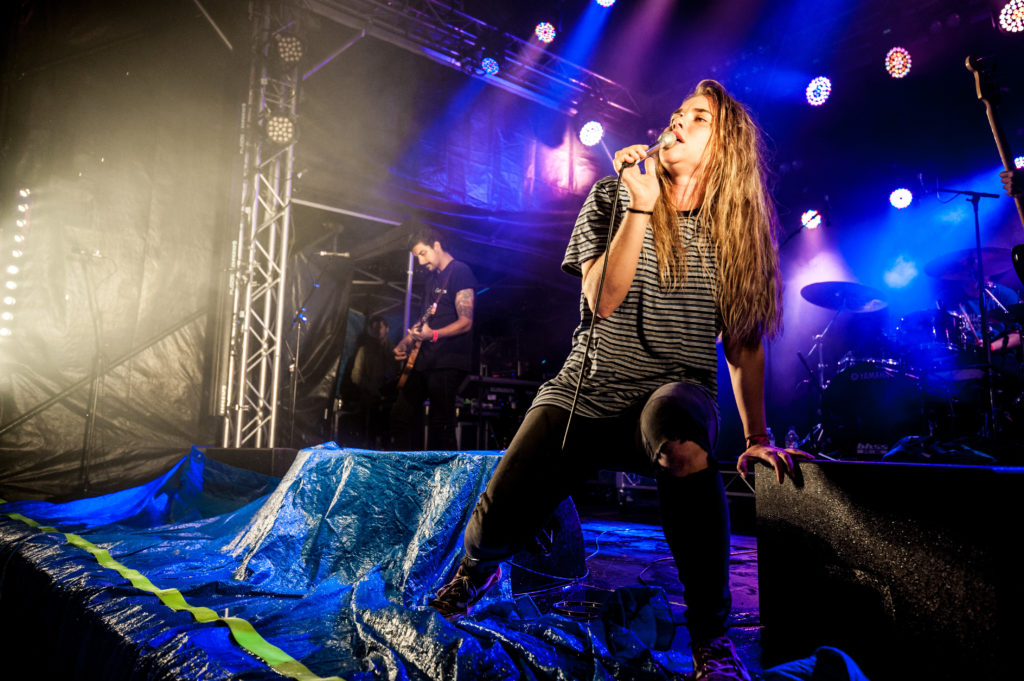 Hills are Alive, The Farm

There is a small sign at the little town of Loch that points festival goers to the weekend event that is The Hills are Alive. Its the only indication that you are going the right way to get to the festival that is hidden on a farm, along a long winding road.

Its raining as people lug camping gear up the hill to set up on the site and nestle in for what will be a weekend of music, fun, new friendships forged and this year a hell of a lot of rain. The stage is the place to be as the winds howl through the valley and the temperature rapidly drops.

A  group of dedicated music lovers have gathered on the hill to watch music in the pouring rain, but nobody seems to mind when performances by bands like Press Club get things pumping on stage enough to heat up the mosh pit.  Press Club front woman Natalie might be dressed in a jumper and jeans, but she is her usual energetic self and she gives it her all despite the rain.

The festival atmosphere is energetic and the momentum keeps on going for Kingswood, with the crowd going wild and the mosh pit heating up. Over towards the bottom of the hill though the karaoke tent is the place to be as virtual strangers sing in unison to classics and sing at the top of their voices in collective joy.

By the next day the rain has let up a little, but its the kind of festival where it could be snowing an nobody would mind – you just layer up a little more.  Cool Out Sun give the main stage the reggae vibes for the early afternoon and the mosh pit is bumping.

Comedy is on the bill for this evening, and its some top shelf comics that keep the crowd laughing. Its no holding back with any of these guys, heckling the crowd, making fun of people, random shouting – its all happening and its a lot of fun.  Gavin Semple gives the gathering endless laughs during his set and nothing is sacred.

Didirri takes things over and its not long before he has a sing along going, the ‘ Jude’ singer is at his best and as the sun goes down he welcomes the night with this angelic voice.

Traditionally sunset is a time for the crowd to gather on the hill and appreciate the beauty over the valley. However the weather is so bad that instead The Pierce Brothers have come out from a soundcheck over at San Remo to play a few numbers for the crowd. Graciously Ceres have given up some of their set time and the guys give it their all before heading off.

As the Saturday winds to a close Vera Blue proves again what a stellar performer she is and dressed in a white cape she has fans screaming out their love for her. She is resplendent and belongs on the stage, a natural performer.

As the sun rises on Sunday everyone is a little worse for wear, but its a good tired that everyone feels. The festival is a small one where everyone is your friend and each time you turn around you can strike up a conversation with the person next to you.  Its a weekend of meeting new people, finding your tribe and having a great time.

The festival will sadly be on hiatus next year and its sure to be missed.