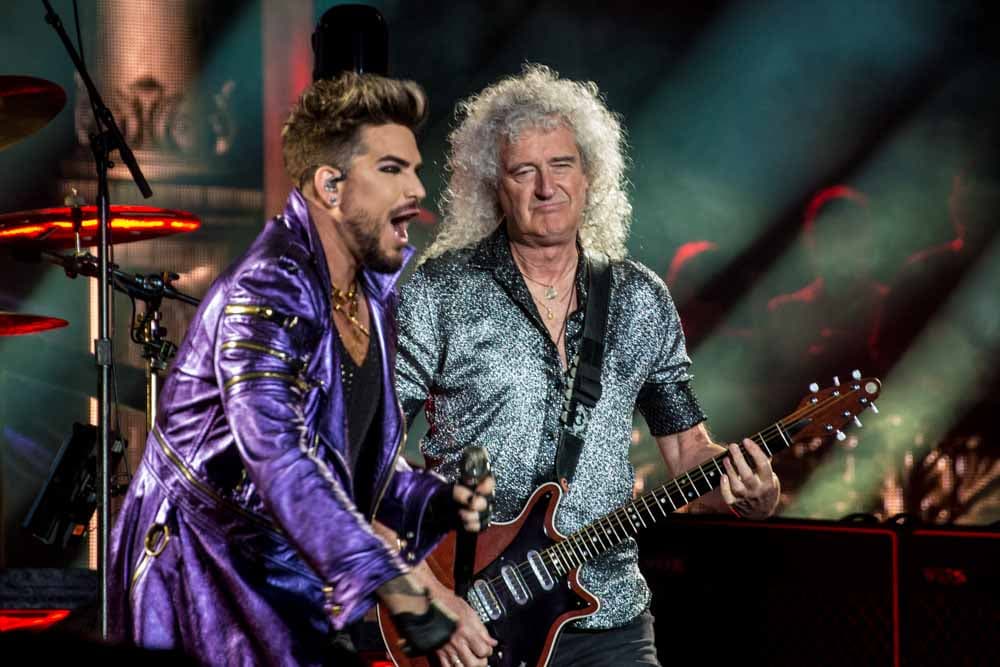 The evening is wet and the wind is wild as the curtains are drawn and a projection of a silhouetted Brian May beams on the screen.

As the real Brian May comes out to play, the crowd breaks into thunderous applause.
Dressed in a long metallic purple coat and with make up for the Gods, Adam Lambert is here to slay.

He powers his way through the hits starting out with ‘ Now I’m here’ and continuing on with popular songs ‘ Don’t stop me now’, ‘ Killer Queen’ and ‘ Somebody to love’

There are a lot of outfit changes during the show, each one better than the last. For “ Crazy Little thing Called Love”, Lambert channels Elvis, getting flirty with the crowd and showing a more cheeky side.

Brian May is equally the consummate performer, and is often out the front, spotlight on him when it’s time for a guitar solo. He takes a seat for a quiet moment to perform “ Love of my Life” on acoustic guitar, an especially touching moment, ending the song with Freddie singing a few bars.

Adam Lambert has fronted Queen for a number of years now and the pairing has been nothing but a success. Lambert brings his own style to the show, not trying to mimic or copy the late Freddie Mercury- which is refreshing. He’s fun, he’s cheeky and has an exceptional vocal range.

The world will never have another Freddie Mercury and he will always be missed, but it’s fantastic that we have Adam Lambert to take up the torch and sing the songs fans all over the world love.