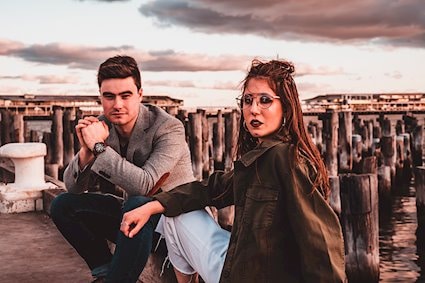 LouSkylar is the fortuitous connection of Jessica Frizziero and Nathan Batham. Their formative collaborations generated a ground swell around debut single Sin which inspired the Melbourne duo to focus on delivering pop music that is both sophisticated and spirited. With an unwavering devotion to style and substance, their hard work has resulted in the sassy single Damaged Goods.

Artists in their own rights, Nathan and Jessica grew up playing music and have developed their individual creative pursuits. Having met serendipitously at the University of Melbourne, Nathan Batham and Jessica Frizziero started working together in early 2017, an elective music project went on to become their debut single Sin, charting at number 13  on the Triple J Unearthed charts and number 4 on the electronic charts in September 2018.

Encouraged by peers and Melbourne’s grass-roots media, LouSkylar took form as a serious outlet for the pair to explore the complexity of songwriting and contribute meaningfully to contemporary music’s capacity for nurturing compassion and confidence. Damaged Goods is the complimentary stylings of Jess’ delicate vocal lines and Nathan’s meticulous production.

“Damaged Goods explores two very conflicting ideas; that raw emotion of battling with insecurities and self-esteem whilst also being a bit sassy like “Well this is me; I’m flawed, I’ve got the things I need to work on and you just gotta deal with that and accept me for me and all my issues.” In many ways it feels like an oxymoron.” – Jessica Frizziero

The distinct energy of Damaged Goods is born from the intricate juxtaposition of clever songwriting and dance floor elevation, counter-melodies entwined with contradiction, individual insecurities dispersed by collective festivity. LouSkylar step up to the demands of modern pop with an acute awareness of their landscape, savvy and sassy.

‘Damaged Goods’ by LouSkylar is out February 22nd.