Gideon Bensen is the mastermind of new Sydney-based outfit Fiction Writer. Squished guitars, sizzling hats and belting drums mince through a propulsive sound falling somewhere between Queens of the Stone Age and DFA, with an undercurrent of 90’s British trip hop. Bensen’s distinctive vocals croon with feeling and mesmerises over the top of a melting pot of soundscapes.” 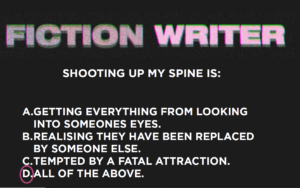 I remember switching on rage one morning and seeing this video. Perhaps its was the state I was in that early in the morning, but i remember being polarised by the song and the video. Its such a simple video, but keeps you captivated and charged. RIP Keith.

Another classic. The song itself is such a statement, but once you start watching Christopher Walken dancing its hard to look away. The clip is so cleverly edited that you cant help but feel like your getting you own private show.

Probably one of the best Villains in music, I remember listening to this track back in 2011. I then found the video and was so confused by this surrealist Short Horror film. Probably one of Marilyn’s most ambitious efforts. A great music video though.

Bat for Lashes- What’s a girl to do

A really earnest clip that seems playful until you see all the animal masks and Children on the side of the road with balloons . But I’m fond of bat for lashes. All the choreography with the bikes is a great touch.

Health – We are Water

I got into this band not long ago, Some great Noise-Rock. Admittedly i found this video hard to watch, but the twist was what I was hoping for, and the ending is like something out of a Tarantino film.

Sinead O’Connor- Nothing compares 2 U

I really love this song. Something Prince originally composed and then re-recorded by Sinead. Its just pure arresting honesty, you see a real display of emotion. Something that is often lost in video clips.

THU 9 MAY | THE LANSDOWNE | SYDNEY