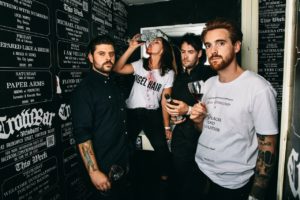 Melbourne-based blackened rock’n’roll band PAGAN are thrilled to announce their debut album Black Wash will be out on July 6 in Australia via EVP Recordings, and the UK / Europe via freshly inked label with Hassle Records. Featuring the new single ‘Death Before Disco’.

We asked the gang what the Top Five  Favourite Punk / Metal Moments You Wished Your Nonna Would Understand’ are. Check out what they had to say.

San Francisco’s Punch were one of our all-time favourite hardcore bands. In 2012, they toured Australia and by some greater fate ended up playing one of their Melbourne shows at The Place. The Place was an old fruit shop that Matt and Xavier’s old band rented and converted into a rehearsal space which had a few shows and became a “place” where we would hang out until its eventual demise (the rent got bumped up). The sound on this video is pretty dusty, but it’s a window into one of the best shows any of us have ever attended and heart-warming to see that space and that band still alive in their respective glory days. Super Unison and Torso are two rad bands that came from Punch’s end. Too much noise for Nonna, but well worth your time!

Wendy O Williams was the greatest. She was a true anti-hero and the most badass woman in the history of rock/metal/punk/whatever. You could post pretty much any video of her and her band The Plasmatics and she would no doubt be doing something rad and wild because she genuinely did not give a fuck about anything, but I think this performance of the song “Butcher Babies” is a great starting point. Shaving cream, exploding amps and a chainsaw. Wendy O is an icon and I’m sure don’t even need to explain why my Nonna, rest her soul, would not care for this one little bit.

Embracing their Italian roots in an almost sarcastic fashion until it’s pretty much become serious, Pagan have charmed audiences with their unique candour and straight-up saucy attitude since forming in 2015. The past 18 months have seen them play coveted spots on UNIFY Festival, Yours & Owls and BIGSOUND.

Check out their music video ‘ Death Before Disco’ here