Rackett. I Please Myself 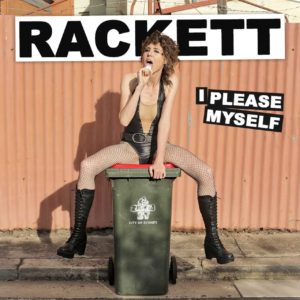 The girls from Sydney Rackett are back with a hot new offering ‘ I Please Myself”, a four track EP the band recorded the it over two days bringing in  Dave Hammer on production and recorded out of Def Wolf Studios in Sydney.  It’s been a wild ride for RACKETT since they released their bombastic debut EP ‘Ready Or Not’ in 2017 and the quick turn around will see the girls gain more momentum in their rise to the top of the charts.

Opening with the killer track and lead single ‘ Tried to Quit’ the EP is kick ass tunes that are catchy and rocking from the opening bars, maintaining the momentum the whole way through.  With kick arse guitars, rapid killer vocals the EP picks up fast and doesn’t throw down until the final notes.

FU demonstrates some exceptional guitar work from Kat Ayla and is a expletive laden song full of attitude and sheer fun. Ayla shining on the guitar solos during the bridge, showing that the girl can play and play with gusto and precision.

Moving on to ” Kiss it Better” is a little on the sexy fun side, however it still manages to maintain the high energy that the rest of the album conveys and is an excellent mid- EP track. Its a not- too serious track that envelopes the ears in rocking guitar and speedy vocals in a sonic delight.

There is a tide of new all- girl groups that have been making noise in the music scene and making the boys quiver in their wake, in a scene that has mostly been  historically dominated by men. The girls from Rackett are leading the charge, and its a strong EP to lead the charge with.

Rackett will be launching the EP in Sydney and have a string of up and coming shows:

Find the girls at: https://www.rackett.tv/