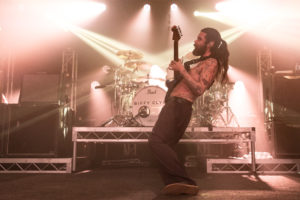 Biffy Clyro w/ WAAX at Eatons Hill Hotel – 2018
Eatons Hill exudes a mild Alice in Wonderland vibe, mostly due to a series of grand, floral-shaped roofing pieces used to illuminate the main room. WAAX appear and the stage lights flash, turning white. Drums, guitar and bass fill the room. Maz de Vita produces her signature vocal trill immediately as a fat beat hammers out from the stage. Their opening song carries lays pop sensibility over rhythmic force, distortion and vocal gravel. They follow with ‘This Everything’, the live rendition best describe as a wall of sonic power. De Vita is a beacon of frantic energy, and for a couple of minutes the song, like its title, is everything.
Next up is ‘I For An Eye’, a track exemplifying just how excited the group is to perform for their hometown. It’s clear they’re giving it everything they’ve got and loving every second. . Meanwhile, moving from song to song, Marie’s composure switches from sensual to messianic, triumphantly punk to dramatically anxious, the sweet end of her voice giving way to an impressive howl.
Following a few minutes of silence, Biffy Clyro herald their entrance  with a dramatic choir and piano piece, arriving  to shouts and cheering with Scottish flags rising up from the crowd. The choir piece continues, and a clap along begins, Without warning, the room saturates with Biffy Clyro’s brand of post-rock.  Syncopated drums, immediately anthemic lyrics and skillfully orchestrated lighting grab the audience from the outset.
‘Biblical’ exemplifies the Biffy paradigm, dragging the room together into one compellingly unified chorus, while the crowd response to ‘Black Chandelier’ feels as much like the positive end of a soccer match as it does a rock concert.
. Naturally some tracks from ‘Ellipsis’ make it into the set list. As always, newer songs are met with great appreciation, but crowds keep their favorites.
Moving from bouncing swing to flat-out rock with ease, the sweat keeps flying but the Biffy energy does not diminish throughout. The band delivers a powerful and floor-shaking set,  Songs as theatrically transcendent as ‘Bubbles’, performed by a group are  seasoned, slick and performed with gusto.   Theirs is a show that raises the intensity song by song, resting for the occasional  pause, but ultimately leaving the audience as breathless as the sweaty Scotsmen on stage.

Behind the lens Nicole Matthews