Set on a hill in rural farmland The Hills are Alive is arguably one of the best  gatherings on the summer music festival line up . A combination of  beautiful weather, great vibing people and a stellar line-up including some hilarious comedians. Such a great vibe. Amazing people. Incredible sunset. Awesome music. Lots of glitter.  Its a weekend you won’t want to forget.

Ahead of this years festival, we are hitting up bands to find out what goods they’d like to have on their Dream Rider.

LANKS is an Australian solo-artist, writer and producer. He has toured with artists such as Vera Blue and Rufus Du Sol, and co-written songs with Tia Gostelow, Woodes and Kilter. After releasing an album and EP, doing Like A Version and a sold out national tour in 2018, he is playing his final LANKS show for some time at The Hills Are Alive before switching into collab-mode on his latest project, Ok Moon.

My Dream Rider by LANKS

My dream rider would have a platter with smoky babaganoush dip (hommus option too) with that delicious flatbread covered in zaatar, fresh vegetables and pickles and also fresh fruit (mango if in season) served in a quiet, cool, soundproofed room with plenty of tea. There should be a few tea options but there definitely needs to have Twinings Lemon and Ginger. There’s room temperature water available but it’s not wrapped in plastic. In fact, there’s no disposable plastic in the room at all. Maybe also massage available to any of the crew that might want to loosen up before the show. There actually doesn’t even need to be a gig, I’m really just describing my dream room. A nice view would be great too, thanks.

The Hills Are Alive is a 3-day, 2-night boutique music and camping festival for good-vibing, music-loving folk. It takes place in the beautifully picturesque rolling Hills of South Gippsland near Loch Village, 90mins from Melbourne, 25mins from Inverloch, 35mins from Phillip Island. Good times with great people in a stunning location.

This year will be the eleventh incarnation of THAA. Legs eleven, we’re going to heaven.

All past ten Hills Are Alive festivals have sold out well before the event and there’s a pretty darn good chance this one will to, so get in early to secure your spot. 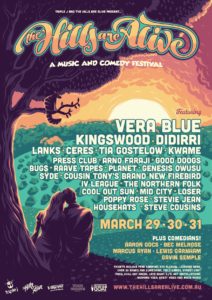