It’s been 10 years since PALM formed in the dark underground of Osaka, Japan, and since then have taken their ever-evolving brand of metallic hardcore all over the world. The bands unique style has seen them share the stage with a bands of all genres in their hometown Osaka and around Japan, as well as appearances at festivals such as “1997”, “Freestyle Outro” and “Rock-O-Rama” at Makihari Messe.

My Dream Rider by PALM

Once the show was done and you returned backstage wouldn’t it be awesome if Lemmy was sitting there smashing a Jack & coke on the slots?

BACKSTAGE BATH-HOUSE By Ba / Will

Bathing is a big part of Japanese culture & you never know when your next shower might be on the road, so it’d be amazing to have a selection of communal baths that we could get into backstage.

This kit has all notes… unbelievable. But it’s too huge for us not to be relaxed haha

Floor plan of the facility By Gu / AKIRA INADA

This is very important in places I visit for the first time. Because I have no sense of direction. In the case of a huge facility it may not reach the stage. Or, I have the danger of standing on the stage with the crotch wetted without being able to release beer that I stuck in my belly. Or call the police during the tour and issue a search request. In order to avoid these, we must grasp the layout properly.

PALM’s third full length album is finally set to be released in August of 2018, with plans to release in Japan as well as Europe, the US and Australia.

Palm are currently on tour with Philip. H. Anselmo and King Parrot. 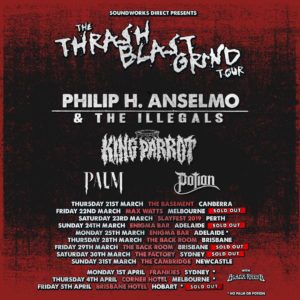