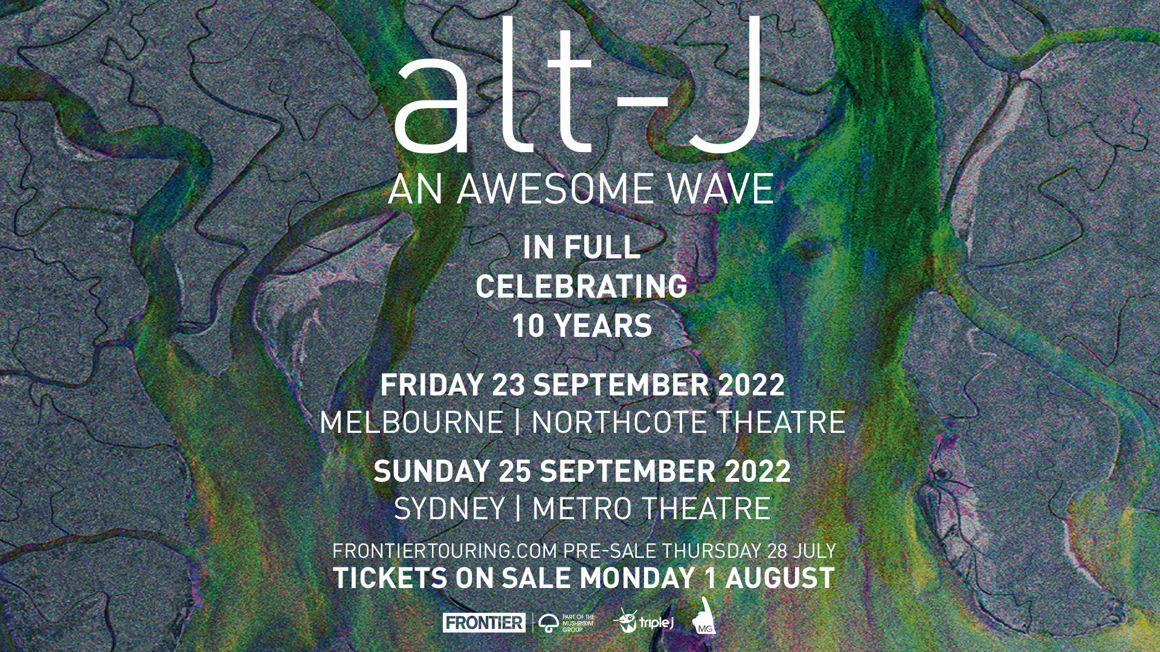 Band to play album in full in Melbourne and Sydney

Frontier Touring are thrilled to announce two very special alt-J live performances of their 2012 ARIA Platinum selling and UK Mercury-prize winning debut album, An Awesome Wave. Celebrating the albums’ 10th anniversary, the band will be playing the game-changing debut in full from start to finish, plus bonus tracks at Melbourne’s Northcote Theatre on Friday 23 September and Sydney’s Metro Theatre on Sunday 25 September. ​
​
​Speaking of their decision to perform the album live in Australia the band say:

It is set to be a truly momentous show, a celebration of the album that introduced the world to Joe Newman, Gus Unger-Hamilton and Thom Sonny Green’s beautifully imaginative, and genre-defying, music. The two shows are to take place during the band’s Australia and New Zealand run across Auckland, Brisbane, Melbourne, Sydney, Adelaide and Perth in support of their fourth and most recent album, The Dream.

About alt-J
​alt-J are one of the most successful British bands of the millennium. Joe Newman, Gus Unger-Hamilton and Thom Sonny Green have released four studio albums that, between them, have sold in excess of two million copies and their songs have been streamed over two and a half billion times. Their 2012 Mercury Prize and Ivor Novello Award-winning debut An Awesome Wave, was followed two years later by their number one, GRAMMY and BRIT Award-nominated album This Is All Yours. Released in 2017, RELAXER flew straight into the top 10 of the UK albums chart ahead of a summer of major international shows – including a headline show at London’s O2 Arena and headline performances at numerous festivals – and became their second album to be nominated for the Mercury Prize.

An Awesome Wave (2022 reissue) is available on white vinyl and other formats (via Liberator Music – here).