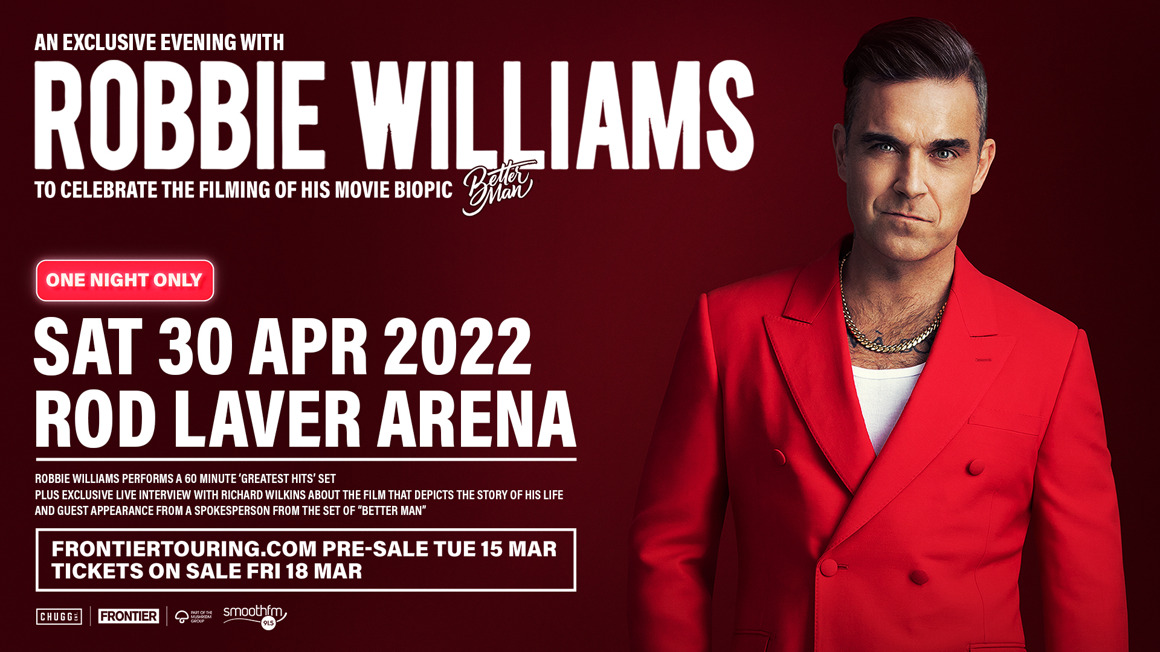 AN EXCLUSIVE EVENING WITH ROBBIE WILLIAMS

An Exclusive Evening With Robbie Williams one night only next month!
In Australia filming his biopic Better Man, the global pop phenomenon will play Rod Laver Arena Melbourne Saturday 30 April 2022
Exclusive Robbie Williams greatest hits set (60 mins)
Includes an on-stage exclusive Robbie Williams interview with Richard Wilkins about the film
Plus, guest appearance from a spokesperson from the set of Better Man
Select performances from the night will be filmed for inclusion in the biopic
Frontier Members pre-sale starts Tuesday 15 March before general public on sale Friday 18 March

Frontier Touring and Chugg Entertainment are delighted to announce ‘An Exclusive Evening With Robbie Williams’. The global pop phenomenon will be in Australia filming his biopic Better Man and for one night only will perform at Rod Laver Arena Melbourne on Saturday 30 April 2022.

This special evening will include a 60-minute greatest hits live show and guest appearance from a spokesperson from the set of Better Man, with select footage from the performance to be included in the final cut of the Better Man film. The show will also include an on-stage exclusive Robbie Williams interview with Richard Wilkins about the film that depicts the story of his life.

“I couldn’t be more excited to be staging this very special, exclusive, never-to-be-repeated night in Melbourne in April. I genuinely love being in Australia, so it’s only fitting that I’m shooting the ‘Better Man’ movie there. I’m delighted to be hosting this unique evening with my Victorian fans, where I’ll be performing a set as well as sharing some exclusive insights into the movie.” – Robbie Williams

In ‘An Exclusive Evening with Robbie Williams’, ticket holders will be treated to one hour of Robbie’s greatest hits, followed by an interview where the UK superstar will share stories of his life and offer audience members an exclusive insight into how this will be translated into the forthcoming film, Better Man.

Select performances from the night will be filmed for inclusion in the biopic, so fans are encouraged to raid the back of the wardrobe and come dressed in their best 90s concert-going outfit. Better Man throws back to the story of Robbie’s life and some of the biggest concert moments of his career.

Williams is without doubt one of the finest male pop stars of his generation, having sold over 80 million albums and 14 number one singles as a solo artist.

With an unparalleled catalogue of pop hits including Angels, Rock DJ, Kids (with Kylie Minogue), Feel, Better Man, Love My Life, Supreme and countless more career-defining smash singles, the Let Me Entertain You superstar does exactly that! Having last toured Australia in 2018 on The Heavy Entertainment Show World Tour, ‘An Exclusive Evening With Robbie Williams’ next month will leave your Lovelight shining bright.

The forthcoming Robbie Williams movie Better Man is directed and co-written by Victorian filmmaker Michael Gracey with the film giving fans an introspective look into the experiences that shaped Williams both on and off stage. Better Man is set to become one of the largest movies to be filmed in Victoria and expected to create around 2200 local jobs.

Don’t miss out on your chance to be part of ‘An Exclusive Evening With Robbie Williams’ for one exclusive night only next month! Tickets are on sale Friday 18 March 1:00pm AEDT.