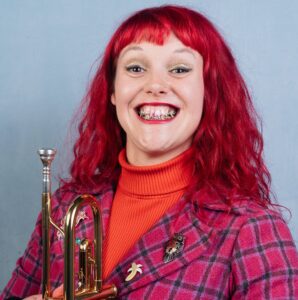 The latest music project Charlie Needs Braces, comes from Melbourne musician Charlie Woods. Charlie is a proud GuriNgai woman, a direct descendant of Bungaree and Matora. The lands running from the central coast of NSW along the mouth of the Hawkesbury river and into Northern Sydney.

Having played on stage with bands such as Teskey Brothers ,The Seven Ups, Ogopogo, WVR BABY, TEK TEK Ensemble, Charlie is venturing out on her own to launch the solo project – Charlie Needs Braces.

Drawing on her own personal experiences Charlie has developed an album that is influenced by her new braces. She also draws on the experience of discovering and learning about her Aboriginal heritage.

After being scammed on Facebook Charlie eventually bought a looping station on Ebay and like most of Melbourne, Charlie learned a new skill during lockdown, she learned to live loop and found it an invaluable time to hone her skills and develop new music.

Inspired by Tune-Yards, Bjork, Allara and Emma Volard the solo project is a combination of brass, percussion, live looping and vocals. Charlie has recorded an EP and accompanying video clips that were filmed in Belgrave by Mr. Kapow ( aka Fabian Acuna) at his mud brick house, changing locations for each clip. The bathroom, lounge room, outside and different times of day for each clip.

Mixed and mastered by Guy Louis Faletolu Charlie says: I am really proud and happy with the EP and am excited to keep releasing Singles and video clips, and then the final EP.

Charlie is currently working on an album and will be releasing videos and singles in the coming months as part of her first solo EP.

Clip can be viewed here: