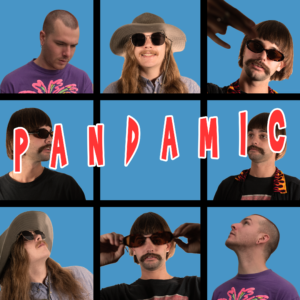 Dune Rats endorsed heavy-hitting three-piece Pandamic are back with their brand new single ‘Bus’, a catchy as hell, middle-finger-up jam to all the haters out there.

Recorded at Bedlam Records (Bugs, Beddy Rays, The Babe Rainbow), the single, which premiered on triple j unearthed, is out today via Ratbag Records / BMG AUS. You can have a listen to ‘Bus’ here

Lead guitarist and vocalist Rhys says of the track: “To be straight, I don’t want anyone to get hit by a bus. That would be horrific…. But if this particular person did get hit by a bus, I wouldn’t care heaps about it? To me this song is just about getting to say “Fuck You” to that one person; without even having to say it! Even though we do say it 4 times!”

To coincide with the release Pandamic have unveiled their latest clip, an angsty nod to a day in the life of a bus driver. Premiering on tastemaker outlet Pilerats – you can check out the clip here

“We thought for this song it would be hilarious to dress up like Sunbus Drivers and play at a bus stop! There were people looking over their fences and yelling out to us, and the poor school kids getting off a bus every 5 minutes had no idea what was going on!

We tried to do a couple things that bus drivers would do after work (like go to a pub and film ourselves yelling at the TAB – but we found out that’s not allowed) but the owner let us cop a beer and get a little bit of footage there! We also went to film at a train track in a cul-de-sac – outside of the Australia Post’s warehouse in Brisbane – to film and that was hilarious, their gatekeeper was a lord and let us film there for a couple hours – cheers Glen!”

Combining raucous riffs, rumbling bass lines, and relentless drumbeats with catchy melodies and melancholy musings on heartbreak and humanity, Pandamic have a dynamic sound that captures the attention of audiences wherever they play from the first note.

Their distinct fusion of grungy skater-punk and indie rock and riotous live act eventually caught the eye of Brisbane surfer-skater-party punks Dune Rats, who signed them to their label Ratbag Records.

Since then, Pandamic have toured in support of both homegrown legends including DZ Deathrays, The Rubens, Slowly Slowly, and The Bennies as well as international heavyweights like US electro-punks The Garden and legendary punk-rock group Me First And The Gimme Gimmes.