The Badlands have returned in 2019 with their highly anticipated new single ‘Ultraviolent’ released this June 4 and produced by Lacueva Studio’s Nick Didia. The song is nothing short of massive.

With a drum introduction that punches through the solar plexus like a cannonball at short range, there’s no way you won’t know about it.
With a solid reputation for gritty, addictive, rock n roll fuelled performances, the band are set to celebrate the release by taking to the road in May – June. The tour takes in The East Coast and Melbourne and also marks the bands comeback to the live stage in over 12 months, after suffering a multitude of injuries in 2018.

With 2019 now underway the band are set to release a solid catalogue of new music and continue with their rise of Rock n Roll notoriety.
Joining the band are fellow Byron indie rockers King Coaster, who are celebrating the release of their debut EP ‘Superflow’.
The shows promise to be ones of grand proportions with some much relished time on the stage and a host of new material ready to go.
Dates include: 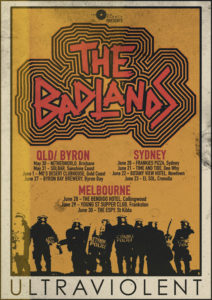