The hilarious Story Party comedy show is back in the Southern Hemisphere to once again make you laugh, cringe and die of laughter once again.

Story Party is the live storytelling show about the one topic we all struggle with — DATING. At Story Party they ask you to put away your phones to enjoy a hilarious show that will make you laugh, cry, and cheer, in real life. Story Party features professional storytellers sharing true dating stories about the time they got played, made, or just tangled up in that love stuff. Did he look nothing like his pictures? Did she talk about her ex too much? Were you so nervous that you spilled your drink in your lap? 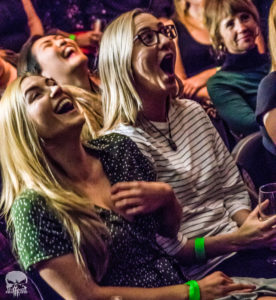 The show will have you rolling in the aisles with tales of the WORST dating experiences ever.. And then its your turn to share and get involved. Knowing that you’re not alone is the best bit. Knowing that there are worst dating stories than the horror you’ve had to endure- EVEN BETTER.  The world is full of crazies, and dating them makes for a great story. Add in some wine and a room full of people that have had equally horrific experiences and you’ve got an explosive show that is unforgettable.

This show is not for the fain-t hearted- its bold, crude, cringe-worthy but ever so funny. So hold onto your seat as your host Rachman Blake takes you on  a roller coaster ride of dating disasters that will leave you thinking ‘ I’m glad that wasn’t me’ as he expertly delivers story after story of what dating can really be like.

“I laughed so hard that I cried! The stories were hilarious and so damn realistic, good to know I’m not the only one going through that dating crap! 😀 thanks for the great show and do come back again with more! “- Jana from Cologne

“This event was so bold. I had such a great laughter, I was laughing so hard that it doubled my shoulder pain but it was worth it. Thank you for visiting Tallinn.”- Rene from Estonia

Catch Story Party near you.