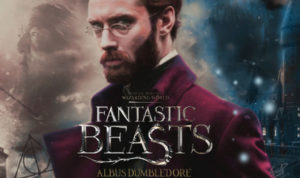 We’re back in this magical realm spin-off with no muggle in sight. Let’s start with the good…

Eddie Redmayne is again our reluctant awkward hero, Newt Scamander, who’s happily settled in England with his Tardis-like menagerie below. His gift for understanding magical animals is equal only to his inability to understand the politics of the magical realm.

Soon he’s visited by Queenie Goldstein (Alison Sudol)  and her now boyfriend, the muggle, Jacob Kowalski (Dan Fogler) who are forbidden to marry. Quick work is made of explaining where these two and Queenie’s sister, Tina (Katherine Waterston), now an Aurore, are at and that everyone is looking for the evil Grindelwald, who himself is looking for Creedence, who everyone assumed had been killed in Fantastic Beasts I. Phew!

Then we have Jude Law as the charismatic Professor Albus Dumbledore helping the gang with a safe house and information. This is a brilliant piece of casting. Jude Law looks effortlessly rakish, charming and sexy in his grey tweed three-piece suit and fedora. Why the professor later chooses to grow his beard and wear a magical dressing gown is unknown but seeing him in this phase explains why he has built a reputation that is both feared and admired by the Magical Ministry. He is a twinkly-eyed, steely force-for-good to be reckoned with.

His relationship with the young Grindelwald, shown in various flashbacks, is also well-handled to ensure there’s no conservative backlash for them being what Dumbledoor recalls as ‘more than brothers’.

One of the highlights of the film is seeing the magical characteristics of some of the weird creatures from the original film. More than just brute force or as flying machines, the Nifler and the twig-like Bowtruckles have abilities that are critical for our magical allies.

If there’s a theme other than good v. evil here it’s the fractured nature of sibling relationships in adulthood. There’s Newt and his brother, Theseus (Callum Turner), who works closely with the Ministry. There’s Leta Lestrange (Zoe Kravitz) and her missing brother, there’s Tina and Queenie and Albus and Grindelwald (Johnny Depp).

Johnny Depp eats this role for breakfast. Dialling up his menacing kitsch drag to 100% in every scene. He is totally believable as the pitiless, malevoulent uber-villian who kills babies and his own trusted pet without a second thought. Without him, this movie would be a total hot mess.

And in many ways it is.

While it’s painfully slow in it’s search for Creedence, it’s also maddeningly fast as the multiple story lines reach their crescenda before an extended all-in magical fight scene where our characters must choose sides. There’s also sooo much (often confusing) exposition in it’s two-hour plus run time, trying to provide justification for all the birther secrets and generational trauma. However the plot is too dense to feel the ending for some of our new characters is earned and falls flat and distracts from the main twisty Creedence-birther storyline.

The Paris version of Diagon Alley alone is worth rewatching to see the incredible detail in set and costume (hello Oscar!). It’s like a magical Belle Epoch-Art Nouveau painting come to life.

So why doesn’t it all work? On reflection, what I loved about the Harry Potter films was the wonder of a boy raised human experiencing the wonders of the magical world. Harry was our avatar and we learned to love the good, fear the bad and wonder at the magic along with him. Fantastic Beasts II really lacks for that ‘muggle’ aspect.

Also, while Eddie Redmayne’s New is a quirky magical Dr. Doolittle, his many affectations including a funny walk and avoiding eye contact or direct speech does little to endear him to our hearts the way the much more likeable and relatable personalities of our Hogwarts trio does. We don’t spend nearly enough time with our ‘good’ characters to truly care for them.

Also, in FB, everyone is just so dour. Things didn’t get grim for Harry until well into the franchise. Plus there was so many moments of humour, banter and kid pranks. The lack of emotional variation is a huge part of why the overall effect is tonally dull and a downer.

Let me lay my cards on the table. I’m a huge fan of the Harry Potter series – both books and films. I also learned to love the first Fantastic Beasts movie and believe it improves dramatically on multiple viewings and so this review comes with the caveat that I will definitely watch this film multiple times and it may, in the end, grow on me. I’ll also be the first in the audience to see FB III, if only to see the ultimate Depp vs Law showdown.

Fantastic Beasts and where to find them: the crimes of Grindelwald is opening in cinemas this Thursday 15 November.