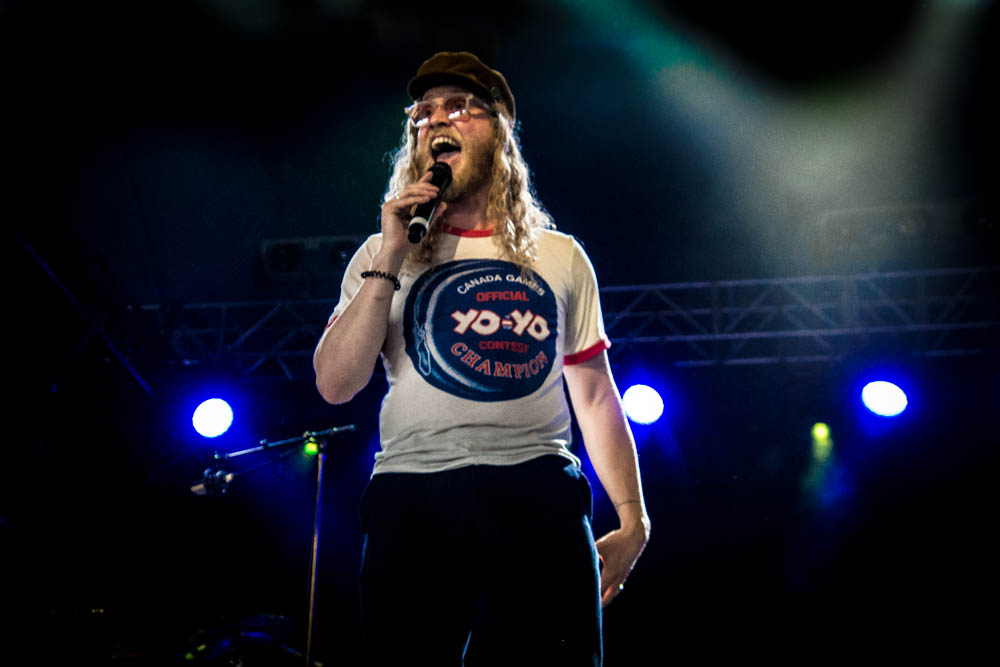 There are not many festivals that can boast a massive thirty years in operation, and as the gates open on the 30th Bluesfest its easy to see why the festival has remained on the calendar for more than a quarter century.

With Irish Mayhem, Arlo Guthrie, Dallas Woods,  Baker Boy and Kurt Vile opening the first night things got off to a great start to kick off the Easter weekend. Kurt Vile and the Violators managed to get the crowd up and moving.  Richard Clapton kept the nostalgia alive whilst New Zealand’s biggest export SIX60 dropped the beat on the Mojo Stage.

Friday morning saw the heavens open up, however Chicago’s Melody Angel turned up the heat opening with an epic performance of Hendrix classic ‘ Hey Joe’. Every year there is a handful of musicians that set the stage on fire with impressive performances and Melody Angel blew the crowd away with her expert guitar playing and deep blues sound.

Back for another Bluesfest St. Paul and the Broken Bones prove again what a delight they are to watch, front man Paul Janeway looking every bit the rock star in a black sequined cape. The Alabama natives yet again impressing the crowd with their big band sound.

Deva Mahal might be the daughter of legend Taj Mahal however the statuesque guitarist proves that she is an expert musician in her own right, her performance captivating.

As the sun sets on the second day the stunning Norah Jones seats herself at a piano making her Bluesfest debut. Looking gracefully beautiful in a black dress the ‘ Come Away with Me’ singer captivates the audience, weaving a special kind of magic, the crowd holding their collective breaths throughout her performance.

Over on the Delta Stage Melbourne’s favorite sons The Pierce Brothers make quite the entrance, raising energy levels and proving that anything can be a drum as long as you have a pair of sticks. The twins are clearly enjoying themselves on the stage and feel right at home under the blue tent.

The evening is drawing to a close when Iggy Pop, the Grandfather of punk comes screaming onto the stage shirtless. He screams like a madman through the pit, opening with ‘  I wanna be Your Dog’ and its a fury of flying arms, legs and everything in between. Over on the Jambalaya stage Flogging Molly are equally as energetic as the second night  draws to a close.

The rain still lingers for day three but its not enough to dampen spirits.  The effervescent Allen Stone kicks off his high energy set with ‘ Brown Eyed Lover’ to get the crowd moving and its nothing but fun.  As he dances carefree around the stage he easily wins over the audience with his mega watt smile.

Crowd favorites Vintage Trouble are back to prove why they are the undisputed kings of Bluesfest and as lead singer Ty moves like a leopard across the stage the audience laps up every moment of the energizing performance.

Legendary  Mavis Staples is a woman of grace and beauty, her deep blues voice rings out across the stage, her classic timelessness captivating.

Over on the Delta stage Fantastic Negrito proves that he really is Fantastic  with his killer dance moves, unique fun lyrics and killer hair. He prowls the stage like a hunter, restlessly looking for prey.  He is engaging and enigmatic all at once and a sight to behold.

The undisputed Prince of Bluesfest and fan favorite Lukas Nelson and the Promise of the Real entertain fans over on the Jambalaya stage, proving yet again what an engaging performer Lukas is. He moves in sync with bassist Corey, the two are dynamic.

Ben Harper never fails to impress his dedicated legion of fans as he opens his set seated with his slide guitar in hand.  Opening with ‘ Forgiven’ and straight into ‘ Whipping Boy’ the California native plays through all the hits, including a duet with Kasey Chambers for ‘ Another Lonely Day’ before finishing up 4/20 with ‘ Burn one Down’. Ben is the consummate musician, wasting no time with stories and entertaining with his emotive, powerful lyrics rather than a glitzy performance. Ben is humble, real and inspiring.

As day four kicks off the Pierce Brothers are back on the Delta stage, rousing the crowd to sing along to ‘ Oh, Brother’ as Jack Pierce runs up and down the barrier. The two work in perfect sync, having the time of their lives.

Making her debut on the Delta stage is relative new cimer Thando who  draws in the crowd and keeps them enthralled with her onstage presence and increadible voice.

American singer and bassist Meschell Ndgeneocello stands back from the main stage as she addresses the audience, her skillful bass playing is enticing and a spectacle to witness. She entertains with her music p, keeping the on stage banger to a minimum.

Hawaii’s favourite son and surfer Jack Johnson closes the fourth night with a memorable peformance. The Banana pancakes singer always at home on the stage with his Cole Clarke in hand.

As the rain clouds depart for the morning Lucy Gallant and Samantha Fish kick things off.  Making a cigar box guitar sound better than it ever has, Fish getting the chance to tick off one of her ‘ bucket list’ items being on stage at Jambalaya.

Julia Stone is etheral and wistful for her performance. She might be playing solo, but she still brings one of the highlight performance of the day to the stage.

The heavens open up as Ray LaMontagne and Wilco’s John Stirratt  give Simon and Garfunkle vibes on stage. Half of the audience might be standing in ankle deep water, however the duo are so captivating that nobody seems to mind, everyone huddling in closer under the canopy as the deluge thunders down.

With the sun dropping behind the horizon David Grey’s recognisable voice rings out across the grounds. The ‘Babylon’ singers voice is pure and flawless, his dance moves infectious.

Its been a whopping great celebration for the thirtieth Bluesfest with performances from some of the world’s biggest musicians celebrating the mile stone. There is no other music festival quite like it, and its five days of memories well made.

Words and images by Amanda Lee Starkey and Monique Pizzica.