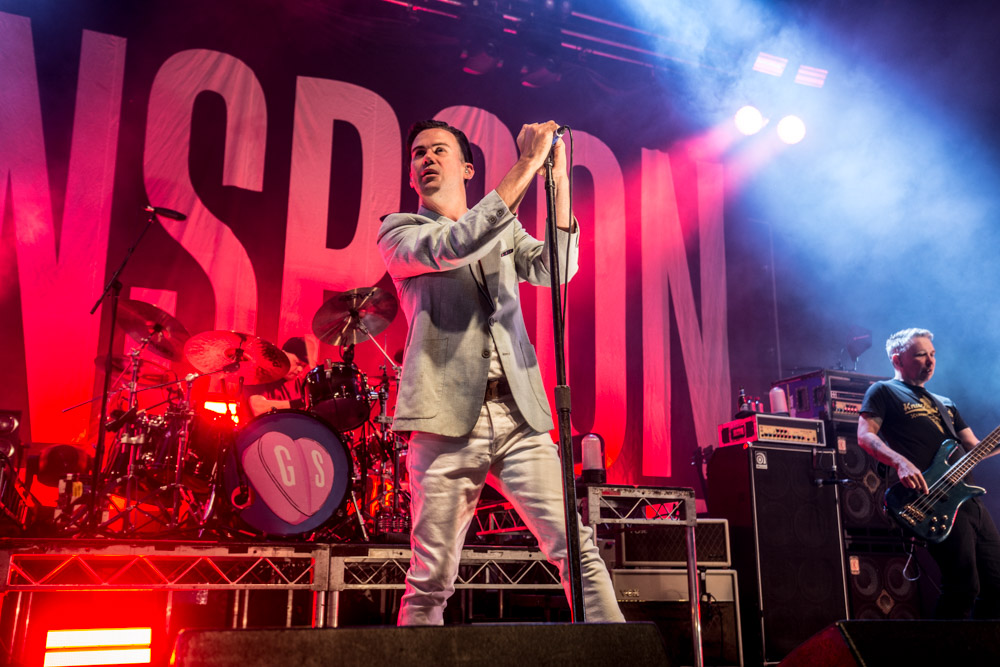 As the Forum begins to slowly fill up, one could be forgiven fo thinking its a Saturday and not a cool Tuesday evening. Thats the thing about Melbourne, any given night of the week and a venue will fill if the band is worth seeing.

For more than 20 years Grinspoon have graced Australian stages with their fast- paced high octane rock. Having broken the scene with 1997s ‘ Guide to Better Living’ the band have been fairly consistent on the music scene since. The Chemical Hearts tour a somewhat homage to all the albums that have kept them in the collective hearts of Australian fans.

Opening with the punching ‘ DCX3’ frontman Phil Jaimeson, positioned next to a giant dancing love heart,  launches himself from the back of the stage to make an entrance the only way he knows how. As usual he is full of energy giving the performance 120%.

Powering through hits ‘ Just Ace’, ‘ Hard Act’ and ‘ No Reason’ the band barely pause to take a breath other than to thank the crowd for ‘ Making Tuesday feel like it’s Saturday’ and the set it full tilt the entire time. Jaimeson is inevitably engaging and fun to watch.

Asking if Melbourne are ready and starting a chant of sorts, the mosh pit explodes for ‘ Ready One’  and the party really has kicked off. Fans raise their hands and drinks to the anthem and strangers dance with either other in unity.

Rushing through the crowd towards the end of the set, Jaimeson suddenly appears at the sound desk to slow things down for and  intimate rendition ‘ Minute by Minuet’ and stands solo among the crowd, every face turned toward him. Followed by’ Badfunk ‘ its a nice moment in between the hurricane of sound.

Saving the popular ‘ Chemical Heart’ for the encore, as the distinctive hook begins the crowd takes the mosh pit multi level and there is not a body in the house standing still as the three tiered arena becomes almost a music festival indoors.

Tonight Grinspoon announced their arrival on stage with a bang and leave much the same way they entered, proving that after more than two decades on the scene the band still have what it takes to turn a Tuesday night into a party.